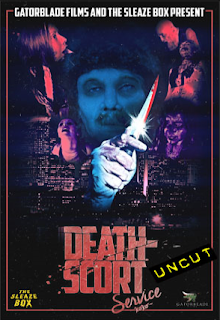 First off, let me start by saying this is one of the greatest horror film titles I have ever seen.  Not only is it a great play on words, it lets you know exactly what you are in for with this movie.  This movie is an exploitation horror film in every sense of the word. There is no great plot, no great character development, and nothing fancy about this film.  It is a dirty, grimy, sick and twisted horror film full of murder, gore, and sex.   What more could you really ask for from a film, right? Ha!

Here is the basic "plot" courtesy of The Sleaze Box:

Deep in the heart of Las Vegas, Nevada, a deranged slasher is on the loose and out for revenge.   A group of local up-and-coming escorts become targets for murder!  Who will fall prey to this maniac?  From the studios that brought you AMERIKAN HOLOKAUST and DIE DIE DELTA PI come a blood-soaked tale about prostitutes who fall victim to a mysterious slasher....

As mentioned above, you have to know what you are getting yourself into when you go into a movie like this.   This is a great film that lets you relax and not have to think to hard, or think at all for that matter.   Instead, you can just sit there and enjoy the scenery along with the amazing special (and most importantly, practical) effects on display.   The filmmakers do not hold back on the blood and gore, as they shouldn't with this type of film.   Basically, you watch this type of film for the kills, and this film does not disappoint at all.   The special effects are the real star here and that is not surprising considering Marcus Koch was the mastermind behind the gore, along with Picardo Limbo and Shelby McIntyre.

If you are fans of old school type shock/exploitation films, full of over the top blood, gore, sex, and nudity, you will be very satisfied with DEATH-SCORT SERVICE.  The DVD is available now and contains the following special features: