Here are this week's horror related DVD/BD's that come out tomorrow, 4/30:

Here are this week's horror related DVD/BD's that come out tomorrow, 4/16:

Check out the first release from Unearthed Films new TOO EXTREME FOR MAINSTREAM line! 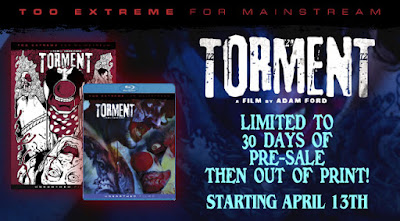 If you are a horror fan, then I'm sure you are well aware of the production/distribution company known as Unearthed Films.   Owned by Stephen Biro, Unearthed Films puts out some of the most disturbing and extreme horror DVDs and Blu-rays.  Well, if that wasn't good enough, they are now rolling out a new line of films called TOO EXTREME FOR MAINSTREAM which will only be available through the Unearthed Films website.   These are films that Amazon, Walmart, Best Buy, etc. would refuse to carry due to the nature of the films.   I am super excited about this new line of films, and the first release in this new line has been announced and will be available to pre-order today!

The first release is the John Wayne Gacy serial killer film, TORMENT.  The film was directed by Adam Ford  and is a great choice for the TOO FXTREME FOR MAINSTREAM film line!  Here is the basic synopsis from the UF website:

Based on the John Wayne Gacy Murders. A young man wakes up after a one night stand and finds himself in the clutches of one of the most notorious serial killers to ever stalk the earth.

Option1:
DVD (limited to the number of units sold): $25+shipping

Option 2:
BLU-RAY (limited to the number of units sold):  $30+shipping 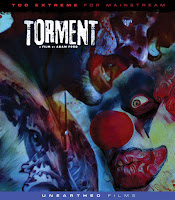 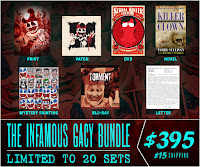 Item included in the Gacy Bundle:

* A one-of-a-kind 9" x 12" painting of John Wayne Gacy by artist Lou Rusconi: Each painting is wrapped and signed by Lou and it will be a mystery which one you will get.

*One letter signed by John Wayne Gacy sent to Merle Allen of The Murder Junkies
*One Novel: "Killer Clown: The John Wayne Gacy Murders" written by Terry Sullivan with Peter T. Maiken
*The DVD "SERIAL KILLER CULTURE" directed by John Borowski
*A Limited Edition Blu-ray of "TORMENT" based on the Gacy murders with a limited edition blood painting cover by artist Ryan Almighty (limited to 20)
*A Limited to 50 signed print of a painting, painted in blood, of Pogo from artist Ryan Almighty
*A hand painted patch of Pogo the clown made by Jeremi Cruise of ToeTag EFX

Yes, you read that correctly....the Gacy Bundle will contain a letter hand signed by John Wayne Gacy himself!

Unearthed Films has hit a home run with this first release in the TOO EXTREME FOR MAINSTREAM film line.  Pre-order your copy starting tonight at 8pm Eastern time!

Check out the trailer for the upcoming zomedy, THE DEAD DON'T DIE

If you were a fan of the film ZOMBIELAND, you will most certainly want to check out this latest Zombie Comedy!   It's called THE DEAD DON'T DIE and it has an amazing cast, including:  Adam Driver, Chloe Sevigny, Tilda Swinton, Steve Buscemi, Selena Gomez, Tom Waits, Carol Kane, Danny Glover, Rosie Perez, RZA, Iggy Pop, and of course, Bill Murray!   The film was written & directed by Jim Jarmusch .   This movie looks like it is going to be a lot of fun!  Check out the trailer below and leave a comment to let me know what you think!


THE DEAD DON'T DIE will be released on June 14th of this year!