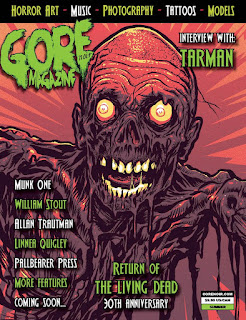 As long as I can remember, I have always been a fan of horror comics and magazines.   I grew up reading the old "Fangoria" and "Gorezone" mags, and in later years have mainly read "Rue Morgue" and "Horror Hound" magazines.
These magazines are great, but I always love finding a new horror magazines to read.

I recently stumbled across a new magazine called "GORE NOIR MAGAZINE".    I came across their booth at a horror convention and the beautiful covers on these magazines instantly caught my eye, especially the Return of The Living Dead 30th Anniversary issue, which is the one I picked up and am reviewing here.   This has to be one of the most beautiful magazine covers I have ever seen!   The cover art was done by an artist that goes by "Munk One" and is actually interviewed in this issue!

GORE NOIR is packed full of interviews with some of your favorite films hottest stars!  For this issue's interviews, GNM talks to Tarman himself, Allan Trautman, as well as scream queen legend Linnea Quigley!  Other interviews include one with William Stout, the production designer for ROTLD, who is credited with the design for the amazing Tarman!

Along with the interviews, this issues also featured an amazing ROTLD retrospective, complete with full color pics and some awesome pics of foreign movie posters for the film, most of which I had never seen.   ROTLD is one of my favorite horror films of all time, so this was definitely an awesome discovery for me!

GNM also has some great articles and interviews with bands in the horror/metal genre in this issue, as well as an article about tattooist Kat Wilson, who specializes in horror themed tattoos!  The pics of her work are amazing, and if I were ever to get a tattoo, I'm headed to Kat's studio to get it done!

If you have never read a copy of GORE NOIR MAGAZINE, do yourself a favor and pick up a copy asap!   Check out their website at  www.gorenoir.com for back issues, subscriptions, and other merch!  You can also follow GORE NOIR MAGAZINE on the following social media sites: