Check out the awesome trailer for the new film, ZOMBEAVERS!! 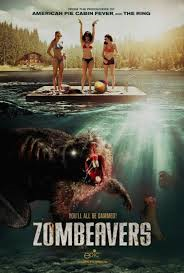 If you only see one zombie film this year, make it ZOMBEAVERS!!  With a name like that, it has to be good, right?  HA!  Well, if the film lives up to the trailer, then this is going to be an instant cult classic!!  How has there not been a film about zombie beavers before now?!   Here is the basic plot of ZOMBEAVERS from the film's imdb page:

ZOMBEAVERS is an action-packed horror/comedy in which a group of college kids staying at a riverside cabin are menaced by a swarm of deadly zombie beavers. A weekend of sex and debauchery soon turns gruesome as the beavers close in on the kids. Riding the line between scary, sexy and funny, the kids are soon fighting for their lives in a desperate attempt to fend off the hoard of beavers that attack them in and around their cabin.

This film looks hilarious, and super gory!  A great combination if done right!  There is no word yet on a release date, but hopefully we will be seeing this movie sooner than later.  I need to see this asap!!  Check out the trailer and let me know what you think.