Check out the crazy trailer for NUIGULUMAR Z, aka GOTHIC LOLITA BATTLE BEAR!! 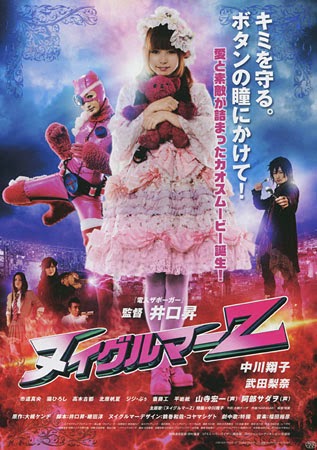 I am a huge fan of crazy Japanese horror films. The crazier, the better in my opinion, so this one looks right up my alley!  The movie is called NUIGULUMAR Z, aka GOTHIC LOLITA BATTLE BEAR!  The film was directed by Noboru Iguchi, one of my favorite directors. His previous work includes THE MACHINE GIRL, ROBOGEISHA and MUTANT GIRLS SQUAD just to name a few.

Here is the basic plot of the film:

Yumeko Ayukawa, better known as Dameko, is a lolita fashion-clad girl who possesses the ability to merge with her pink teddy bear Buusuke to become ""Nuigulumar"". In her new form she must do battle against a villain named Takeshi who's using zombies in his plot to take over the world.

So the film is probably more of an action/adventure/fantasy film than a true horror film, but it's got zombies in it, so close enough!   Check out the trailer and let me know what you think.   The film was released in Japan last month, and there is currently no U.S. release date that I have seen.