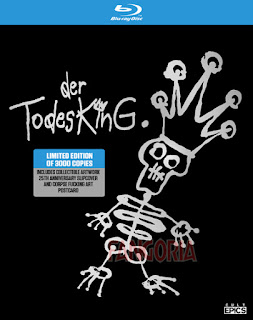 If you are familiar with the films of Jorg Buttgereit, you will know what you are in for when you go into your first viewing of DER TODESKING (The Death King).  Buttgereit is the mastermind behind the cult films, NEKROMANTIK and NEKROMANTIK 2.   With DER TODESKING, Buttgereit has once again given us a very powerful film.  His films are shocking to say the least, but you can't help but want to watch.   As vile and disgusting as the subject matter and scenes might be, Buttgereit somehow manages to find beauty in them at the same time.  Here is the basic plot of DER TODESKING from Cult Epics:

Cult Epics presents the third release in the series Corpse F##king Art; Jorg Buttgereit’s powerful masterpiece Der Todesking (aka The Death King), made in-between Nekromantik (1987) and Nekromantik 2 (1991). Seven stories on Death and Suicide, each taking place on a different day of the week, enframed by the decomposition of a human body. Warning: extremely graphic.

That's it...pretty basic.  This film focuses on death, both murders and suicides.  While hard to watch, it's even harder to turn away.    I love Buttgereit's film style with his great camera angles and choice of music. This film was a little different than his others in that it is basically 7 scenes, each for a day of the week, put together to form the film.  Each day focuses on a different set of characters and situations, all resulting in death in some manner.  In between each day we get a scene of a decaying corpse, that gets progressively worse during each of the 7 days.  Again, the film can be hard to watch, as death is something that most people are not comfortable with.  Death is just as much a part of life as life itself is, so it is not something we should shy away from when it comes to a film's subject matter.  I can understand, though, how some people might find this film disturbing, so watch at your own risk.

DER TODESKING is available now on limited edition DVD and Blu-ray from Cult Epics and
contains the following special features: