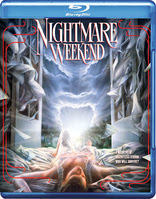 Let me start by saying I LOVE the 80's.  I love everything about that decade.  It is the decade I grew up in and have such fond memories from.  I love the wacky music, the crazy clothes and the weird and wild movies.    I truly think the 1980s was the best decade for horror films, followed closely by the 1970's.    NIGHTMARE WEEKEND is a perfect example of a wild, crazy, 1980's horror film.   Here is the basic plot from the Vinegar Syndrome website:

A brilliant computer scientist has just finished work on his greatest creation: a super computer with the ability to transform the personalities of bad and disobedient people. In anticipation of sharing his work with the scientific community, the scientist invites a fellow expert to test the machine on a group of debauched young women. Little does he know that his colleague intends to use the computer to turn their subjects into bloodthirsty mutants!
Made by a French crew in Florida, NIGHTMARE WEEKEND is a non-stop assault on the senses. Head explosions, gratuitous nudity and softcore sex, bikers, roller-skating, and a telepathic hand puppet named George rank NIGHTMARE WEEKEND among the weirdest and most jaw droppingly absurd horror films of the 1980s. Long available only in low quality transfers of the R rated version, Vinegar Syndrome presents this forgotten trash masterpiece fully uncut and in widescreen, on Blu-ray for the first time!

You can tell this film is from the 80's as it is very dated with the wardrobe and props, but I have to admit it was fun seeing guys with huge Walkmans and earphones and women doing jazzercize and roller skating!    While that was a lot fun and brought back some memories, the film itself was a lot of fun, although it was very strange.  In fact, one of the main characters is a talking hand puppet.  I still don't quite get how he fit into this film, but the actors act like he is just any other co-star and act totally normal with the puppet as a character.  Very weird for sure...and again, only from a movie from the 80's!

The film has some great gore scenes for fans of that (aren't we all), some great kills, and some great action, including a killer car that is controlled by a video game!?  Ha!  Did I mention how crazy and weird this film was?   This is a film you will need to check out for sure if you have never seen it.  This is such a nostalgic 80s flick and one that surely belongs in any DVD/BD collector's library!