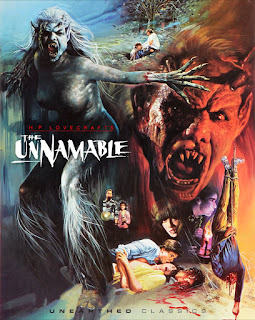 For years I have had a DVD copy of a film called, THE UNNAMABLE II.   I had never watched it, because I didn't want to see part 2 of something before I had seen part 1.  I assumed I could find the first UNNAMABLE on DVD, but was never able to.  It turns out the first film had never been releases on DVD.  Well, now the search is over and I can add the first film to my collection thanks to the amazing Stephen Biro and Unearthed Films.  Unearthed Films recently bought the rights to THE UNNAMABLE and have released an amazing DVD and Blu-ray of the film with a newly restored 4K transfer.

If you are unfamiliar with this film, here is the basic plot synopsis courtesy of the MVD website:

College students from Miskatonic University who retreat to an early 18th-century mansion for a weekend of lust are stalked by a fatalistic female in this horror film based on a story by H.P. Lovecraft. The demon delights in tearing the limbs off her human victims to carry out a centuries-old family curse.

This film was released in 1988, and there is no doubt that it is a product of the 80's.   The character's clothing and hair is a dead giveaway.   That's how we looked back then, though, so try to look past the laughable clothing choices of some of these characters.   The story is simple enough, kids are trying to stay in a house that is inhabited by an ancient creature of some sort.  I'm sure it's no surprise to you that the kids meet their demise, one at a time.   There are some gruesome kills and some amazing gore in this film, all by practical effects.   The monster is not really seen until towards the very end of the film, but when it is revealed, it is well worth the wait.   I have no clue what this creature is supposed to be, but it look like it's part goat with it's hooved feet and fur!

Unearthed Films has done an amazing job with this release.  The picture quality is very clear and I have to comment on the beautiful slip case cover art!   I have no idea who did that cover art, but it is truly amazing!    Now, I do have to mention one issue I found with this release, and that is the 5.1 DTS-HD Surround Sound has a glitch where the sound effects are doubled.  So basically it sounds like an echo after every sound effect.  This was super annoying, but switching to the original 2.0 Mono soundtrack fixed the issue and it was fine after doing that.   It's a very minor issue, but definitely worthy of a mention.

This is a must see in my opinion, especially if you are a fan of  H.P. Lovecraft and films inspired by his stories.

THE UNNAMABLE is available now on DVD & Blu-ray from Unearthed Classics and MVD Entertainment and includes the following Special Features: