Check out the trailer for DORCHESTER'S REVENGE: THE RETURN OF CRINOLINE HEAD 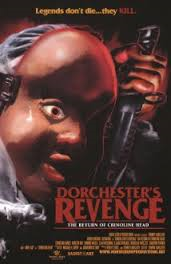 Check out the trailer for the sequel to the 1996 slasher film, CRINOLINE HEAD.  The sequel is called DORCHESTER'S REVENGE:  THE RETURN OF CRINOLINE HEAD and it looks like it is going to be a really fun film!  I have never seen CRINOLINE HEAD, or even heard of it really, but now this makes me want to check out the original film as well.

The film is from Horse Creek Productions and was written and directed by Tommy Faircloth. Here's the brief plot description from the film's Imdb.com page:

A group of college students researching Dorchester Stewart, better known as the infamous killer Crinoline Head, return to the scene of the horrific murders that happened in 1996.

You can order DORCHESTER'S REVENGE on a signed, limited edition retro VHS or any other great item from Horse Creek Productions by clicking HERE.