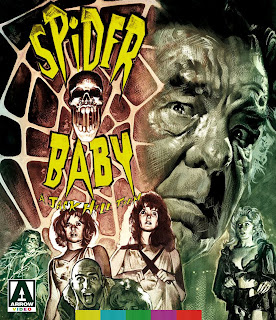 Wow!  How did I go this long without seeing this film?!   SPIDER BABY is one of those weird cult classics that I had always heard about, but had never seen.  In fact, I've had an earlier DVD release of this film in my collection for years, but had yet to watch it.   Well, that DVD is obsolete now thanks to the great folks over at Arrow Films.  Arrow continues to put out some of the nicest Blu-ray releases I have ever seen, and this one is no different.   Here is the synopsis of the film from the MVD website:

The credits dub this "the maddest story ever told", a promise that's well on the way to being fulfilled in the opening scene alone, when Virginia traps and kills a hapless deliveryman in her makeshift web. She's one of three siblings who suffer from a unique genetic disorder that causes them to regress back to childhood, while retaining the physical strength and sexual maturity of adults. Lon Chaney Jr gave one of his most memorable late performances as Bruno, their guardian and protector, who has managed to cover up their crimes until two distant relatives lay claim to their house. When they insist on moving in, Bruno has to cross his fingers and hope that the 'children' behave towards their new guests... This was the first solo feature by Jack Hill, whom Quentin Tarantino dubbed "the Howard Hawks of exploitation filmmaking", and it remains one of his wildest and weirdest.

This is definitely one of the weirdest and wildest films I have seen, and that is saying a lot!  I can't imagine how audiences reacted to this film back in the late 60's when it was originally released.  I am sure they had never seen anything like this before!

While I sometimes shy away from older, black & white, horror films, I almost always end up really enjoying them.   The black & white is so nostalgic and it's a lot of fun coming across an old classic like this that I haven't seen before.   The picture quality looks amazing on this blu-ray.  Arrow always does a remarkable job with their blu-ray transfers, and this one is no different.

I knew I was going to like this film from the opening credits, and the opening scene cemented this for me.  In the opening scene we see young Virginia lure a delivery man up to her house and to the window.  Little does the man know he is the 'bug' to Virginia's 'spider' in her sick and twisted game.   Once the 'spider' catches the 'bug', it's all over for poor Mr. delivery man.  Virginia, Elizabeth, and Ralph  (played by Sid Haig of THE DEVIL'S REJECTS) make up the trio of kids who do some awful things.  They are all mentally unstable and no one is safe when they are around!

This was such a fun, weird, creepy film.   This is one I will definitely be watching again in the near future.  I highly recommend this one.  If you have never seen SPIDER BABY, do yourself a favor and pick up this new Blu-ray release asap!

SPIDER BABY is available now on blu-ray from Arrow Films.  It is being distributed here in the U.S. by MVD Entertainment.  Arrow films always contain tons of special features/extras, and this release is no different.  Special Features on SPIDER BABY include: 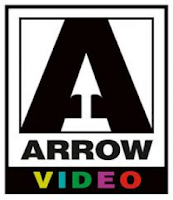