Check out the visual stunning trailer for ATTACK ON TITAN 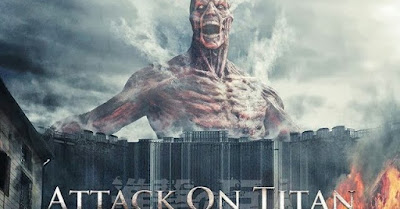 I recently found a very cool horror website called  "theblood-shed.com".    While browsing this site recently, I ran across a trailer for a movie called ATTACK ON TITAN.   The trailer blew me away with it's visuals.   Here is the official synopsis taken from theblood-shed.com website:

The sudden arrival of the Titans—mysterious, gigantic humanoid creatures who devour human beings one after the other—brings mankind to the brink of extinction. Fast-forward to more than 100 years later. What remains of the human population now live in relative peace behind massive walls that were erected to defend against the Titans. Yet, once again, that peace is shattered when a Titan measuring over 5o meters tall smashes through the wall, allowing a horde of other Titans to enter.
The Protagonist, Eren, had been resigned to life confined behind these walls. “Nothing I do would make a difference,” he thought. But when he joins the “Outer Wall Restoration Team” set up to fight against the Titans, he is reunited with Mikasa, a childhood friend and someone he long rued not being able to save. The new recruits embark on a mission to obtain explosives, which have become rare and precious, before getting past the waves of Titans to plug the gaping hole in the wall, with humanity’s survival on the line. Will there be a future for Eren and Mikasa… and for mankind itself?

I knew nothing about this title, but upon further research found that is based on off of a anime comic and TV series of the same name.   This film looks remarkable.  It's being released August 1st in Japan.  Hopefully we will get a chance to see this one here in the states very soon!  Check out the trailer and let me know what you think!