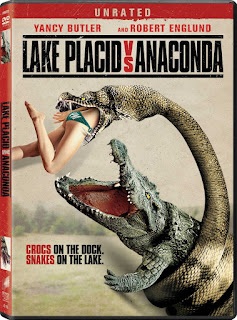 With a title like that, it's gotta be good...right?  Well, LAKE PLACID VS. ANACONDA won't be winning any awards any time soon, but it achieves what it sets out to do which is entertain you with some mindless crocodile vs. giant snake action!   Here is the basic plot synopsis from the film's press release:

Anacondas large enough to crush an SUV. Crocodiles strong enough to leap onto speedboats. When they’re not hunting for human prey, they’re more than willing to take on each other. Get ready for a non-stop bloodbath unlike anything you’ve seen before in this heart-pounding battle between mutated crocodiles and genetically engineered anacondas. Packed with hot sorority girls, big guns, and jaws massive enough to swallow a human in one bite, this is one screaming good time!

If you're wondering what to expect with this film, keep in mind this was made for the SyFy  network.  If you are familiar with the movies they've been putting out lately, you will know exactly what you are in for with this film.   Let me start by saying that most of the acting in this movie is atrocious...except for horror icon Robert Englund, who is way out of his league with this film in my opinion.  But, we don't really watch these movies for the characters and the acting do we.  With a film like this, we are here for some great crocodile and anaconda action, and luckily, the film delivers when it comes to that.

Now again, realizing this is a SyFy movie, the creature effects are not something you will find in a big budget blockbuster film.   The animals are all CGI and it shows, very badly at some times.  If you can keep from letting that bother you, then you will be able to sit back and just enjoy the crazy croc vs. snake carnage!  The crocodile kills people, the anaconda kills people, then they fight each other in a crazy reptile title match!   While it's not the best of the LAKE PLACID or ANACONDA series, it is still a very fun creature feature that should keep you entertained for the entire running time.

LAKE PLACID VS. ANACONDA is available now on DVD from Sony Home Entertainment.