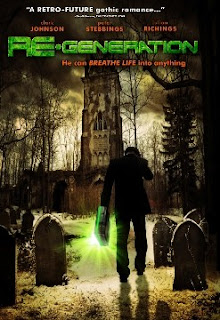 RE-GENERATION
Directed by: Anais Granofsky
Distributed by Indican Pictures
RE-GENERATION is one of those films that's hard to categorize. Sure, it has a science-fiction premise, but it's also a drama and a thriller. Amazingly, though, the film pulls off all three genres pretty well.
If you're not familiar with RE-GENERATION, here is the plot, courtesy of the DVD cover:


In the not too distant future where earth is decimated by eco-catastrophe, the human population is declining and most of the world's resources are controlled by a select few. A new underground market emerges -- limb sales and regeneration. Disgraced Dr. Gabriel Goode is beckoned to the remote wilderness to regenerate a rich politician's daughter illegally, but soon he finds out dark family secrets and forbidden love with the politician's mutant daughter that leads to an X-file finale.
RE-GENERATION is an interesting foray into surrealism. It's almost hard to describe. The setting and props give it a vintage feel but the story and back story definitely lend to the futuristic vibe. The conflicting result almost confuses your brain as you watch the film. My mind kept trying to process the film as set in the past, but I kept having to remind myself that it's set in the future.
I enjoyed RE-GENERATION for the most part, but I feel that it could have been better. The primary negative for me is that the story is not that engaging. It's not that the plot isn't interesting...on the contrary, the synopsis makes it sound pretty good. But the execution comes across as a bit bland, almost drab in certain scenes. There are also several things in the film that are never explained, such as the doctor's 'visions' that he experiences when taking a specific drug. This isn't enough to take you out of the film, but it definitely left me with a frown as the credits rolled.
The acting however is quite good, although actress Ingrid Veninger looks very creepy as an albino, dread-locked young woman. She manages to bring to her character a certain sense of mystery, albeit a scary a one. And Peter Stebbings does a great job as well, along with the supporting cast.
I was expecting more in the special effects department for RE-GENERATION, however I was quite let down. There are not many scenes that contain them and they don't seem overly impressive when they're on-screen. You would think a film about a limb salesman would have lots of appendages flailing about. Still, I suppose I can see the production team focusing more on the story than the visual, which is fine for this type of film.
To summarize, I'm a little torn on this one. Although I enjoyed it overall, I don't see myself revisiting it. I am pretty sure this is one of those films you have to see for yourself to decide whether or not you'll like it. So, I guess my bottom line for RE-GENERATION is check it out, but be prepared for possible disappointment