Check out the trailer for ALL HALLOWS' EVE! 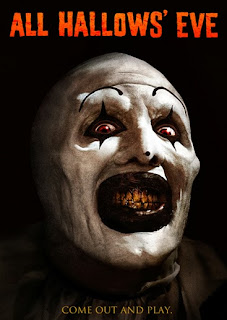 While browsing the web today, I ran across the trailer for a killer clown film called ALL HALLOWS' EVE.  The film was written and directed by Damien Leone. I had not heard anything about this film until now, and I am a big fan of creepy clowns, so I wanted to check this out.  Here is the basic plot from the film's imdb.com page:

While watching two children on Halloween night, a babysitter finds an old VHS tape in the kids' trick or treat bag. The tape features three tales of terror, all linked together by a murderous clown. As the night goes on strange things begin to occur in the house. It isn't long before the babysitter learns the horrifying truth... the maniacal clown is slowly working his way into her reality.

The trailer looks like this could be a pretty cool film! Watch the trailer and let me know what you think!

ALL HALLOWS' EVE will be released on VOD and DVD on October 29th.