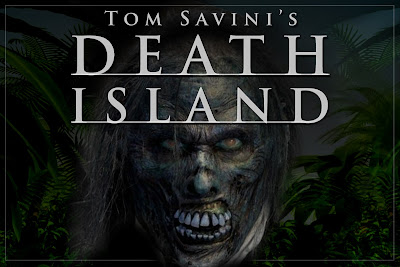 While browsing the cool sci-fi website Giantfreakinrobot.com, I came across an article about legendary special effect master Tom Savini, and his quest to make the next great zombie film!  The film is called DEATH ISLAND, and he is trying to raise 1 million dollars to create this film.  Here is some info about this new feature from the films indiegogo page:

Tom Savini, a legend in the horror genre, is set to direct a script that he helped write that will re-invent the zombie film. This is a very personal film for Tom. After directing the 1990 remake of Night of the Living Dead Tom said he would never want to direct another zombie film until he felt he could make them scary again. And with Tom Savini's Death Island he feels that time has come. And with your help, he will get this chance to bring this ground breaking film to life and out to the fans. So we're calling on all you zombie lovers and horror fans the world over to help us make this film.
With a great story, some of the most unique and horrifying zombie kills ever
filmed as well as a fast paced and thrilling adventure with wonderful characters, Tom Savini promises to give the fans what they want and create a world that will be talked about for years to come. The fans want a fresh and exciting take on zombies and Tom Savini’s Death Island is that film! And with this crowd funding effort you can be a major part of making this historic film a reality!

If you can't contribute any $, then help spread the word by posting this link any where you can:
www.letsmakeazombiemovie.com. This link will take people directly to the indiegogo page.
Posted by ZOMBIE HAYES at 9:54 PM