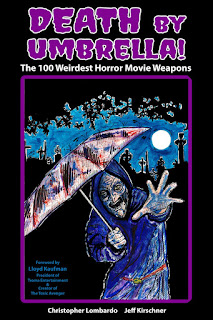 I don't do as many book reviews on the site as I'd like to, so I am trying to change that.  Expect more book reviews in the coming months, as there have been some amazing horror related books released lately!

One of the best I have found lately is the book DEATH BY UMBRELLA, an easy read with 100 different short essays on the strangest deaths imaginable in horror films.  This is perfect for the short attention spanned person such as myself.   Each entry is no more than a page or two, so is nice to just read a few entries whenever I have just a few minutes to spare.

This is an extremely fun book, with 100 of the best kills from horror movies spanning many years.   The authors split the kills/weapons up into 7 chapters/categories, including kills by weapons found around the home, in the kitchen, sports and recreation, machinery, tight squeezes, and more.

Here are some of the more crazy weapons described in this book:

Read about these and  92 other crazy weapons in DEATH BY UMBRELLA!   This book is available now from Bearmanor Media.  I highly recommend this fun book for all horror fans!