What do you think of....SCARY MOVIE 5 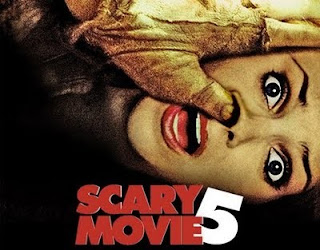 I really like the first two SCARY MOVIE films.  I actually like part 2 better than the first one.  Then along came part 3 and it was pretty horrible, and then to be quite honest, I totally forgot there even was a part 4.  Well, I had no clue SCARY MOVIE 5 was being made, but I saw the trailer the other night in the theater while there to watch DJANGO UNCHAINED (which was a magnificent movie, by the way).  So, I thought I would pass on the SCARY MOVIE 5 trailer in case you haven't seen it yet.   It looks like basically a spoof of the PARANORMAL ACTIVITY films, and honestly I don't think it looks that funny.
Watch the trailer and let me know what you think.  SCARY MOVIE 5 comes out April 12th of this year.  That is also the same day the EVIL DEAD remake comes out.  Guess which film I will be seeing that night!?

CLICK HERE to watch the trailer
Posted by ZOMBIE HAYES at 6:50 PM