Check out the trailer for America Olivo's new film, NEIGHBOR 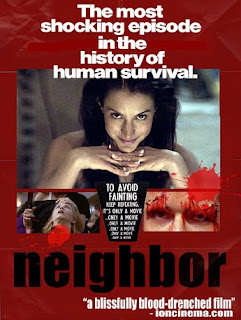 America's favorite new Horror actress (we'll mine anyway) is America Olivo. You might remember her as Amanda from last year's FRIDAY THE 13th remake, or from her role as Camero in last year's exploitation action fest, BITCH SLAP. Well, America is back in a new film called NEIGHBOR. Here is the basic plot from imdb.com:

A mysterious new girl arrives in posh suburban neighborhood and quickly sets out to terrorize the town. As she starts breaking into homes and torturing the occupants, they begin to realize that she isn't just another girl next door.
At first look of the trailer, I thought it was going to be just a HOSTEL type torture film, but the further in I got it looks like it will be more psychological and really terrifying, as America looks so pretty and innocent, but is doing such bad things! Watch the trailer and then let me know what you think! NEIGHBOR is set to be released to DVD in an unrated director's cut on July 27th.