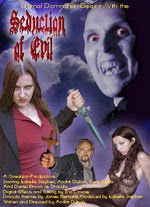 Ahh...now this is refreshing!! After being bombarded in the media lately with stories of teenage vampires that sparkle in the sunlight and their high school love triangles, it is so nice to get back to a real vampire story. SEDUCTION OF EVIL is a GreatStar production and is being distributed by A.normale Productions (the great folks that brought us the KILLER CUP films). SEDUCTION OF EVIL is a dark, Gothic, horror film...just like a good vampire story should be!
Here is the basic plot synopsis from the A.normale Productions website:
A man in his fifties comes face to face with his long lost girlfriend, whom he believed was killed some 25 years ago, only to find out that she was seduced by the powers of evil... the prince of darkness himself, Count Dracula!
This film is a tribute to the classic Hammer Horror films. Dracula was played remarkably well by genre veteran Christopher Lee in those films, and actor Daniel Brown does a good job here doing his best Lee inspired Dracula. Like the Hammer films, this film contains some beautiful women and a very Gothic vibe. The acting is good all around, and the music is wonderful. The instrumental music is very eerie and sets the tone for the film. There is also a song by Alice Cooper in the film, so that was a nice bonus! SEDUCTION OF EVIL was written and Directed by Andre Dubois and is definitely recommended if you are looking to return to the classic vampire film.
CLICK HERE to purchase a DVD of SEDUCTION OF EVIL