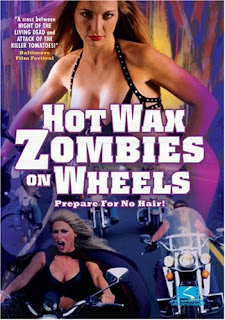 "What's in a name? That which we call a rose by any other name would smell as sweet"
--William Shakespeare

Well Bill, I will tell you whats in a name. What's in the name of this film is the word Zombie. But that which we call a zombie in this film is not a zombie at all, therefore smells about as sweet as a dirty diaper on a hot summer day.

Before I go any further, here is the basic plot from the Pathfinder Pictures' website:

A sleepy fishing village is terrorized by a band of hairless zombies on motorcycles. When a bodacious female biker and her muscular henchman, both bent on ridding the world's human population of pesky body hair move into town it's up to the town's lingerie shop owner, her boyfriend and her boyfriend's best friend to battle hairlessness for the sake of Planet Earth.

Ok...that being said, lets start with the positive things about this film. Unfortunately, this will be the shortest part of the review. Ok...first off, the movie was filmed in a coastal town in California, so you get to see some beautiful scenery. Next, the picture quality is outstanding for a low budget film such as this. The DVD cover looks kinda grainy, so I expected the movie to be the same way, but it was shot very well and looks very good. Lastly, the film has one of the best titles I have ever heard.

Now on to the negatives.....lets start with that awesome title. HOT WAX ZOMBIES ON WHEELS. Man, I love the sound of that! Any movie with the word zombie in the title is a friend of mine! But...there is one major issue here....there are NO zombies in this movie! Wait, what's that you say Zombie Hayes? There are no zombies in a film that contains zombie in the title! You heard me right...not a single zombie in the whole film. Zero. Zilch. Nada. Well, no "living dead" zombies anyway. Apparently what they consider a zombie in this film is someone who just acts brainwashed and has ridded themselves of "pesky body hair". In the plot it mentions "a band of hairless zombies on motorcycles." That should have been one of the coolest images in cinema..unfortunately, they just weren't there.
Next, the acting is bad. Some performances are worse than others, but overall they are pretty lacking in the acting department. Next is the use of silly sound effects throughout the film to try to get a laugh. This attempt falls flat and adds nothing to the humor.
Now I know I shouldn't take this film to seriously. I mean, it is obviously a comedy film, and a very silly one at that. But even a silly B-movie can be fun, but this film just was not. After watching this film, you will not need a waxing salon, because you will probably be pulling your hair out with frustration!