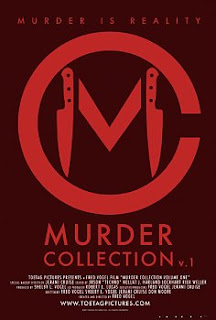 I have heard about a film called MURDER COLLECTION V. 1 for some time now. It is from Toe Tag Pictures and the the great director Fred Vogel, who's previous work includes the AUGUST UNDERGROUND series. I had previously read about this film in an issue of Rue Morgue magazine. In fact, Rue Morgue awarded MURDER COLLECTION V. 1 the "Best Gore Scene" of 2009, thanks to the wonderful gore effects of special effects supervisor Jerami Cruise. I finally got a chance to see the film, and I am happy to report it is definitely worth it's hype. This is a brutal film and definitely one worth checking out. Here is the basic plot:

Murder Collection: Volume 1, revives an early 1990’s Internet clip show, Murder, which was notorious for streaming videos of actual killings. After gaining popularity, the infamous show was discovered by authorities and shut down forcing the host, Balan, into obscurity. Over more than a decade in the shadows, the obsessed host continued to search for scenes of brutality that provoke a maelstrom of emotion. Balan has recently emerged from the darkness and is eager to show you his collection.
This is not a "fun" horror movie. There is nothing campy here...no dark humor or anything remotely funny. Even though the movie has a "plot", it is really nothing more than death scene after death scene with your host Balan talking a little between each one. The scenes in this film are remarkably realistic. From the scene of a terrorist beheading to the scene that won the "Best Gore Scene" award, a scene of what looks to be a real autopsy. Remember, nothing is real here, it is all just special effects for a movie, but you do have to keep telling yourself that sometimes. While this is not a movie every horror fan will love, a lot will, especially if you are fans of the FACES OF DEATH and TRACES OF DEATH type films. If anything, you at least have to appreciate the wonderful effects in the film, and the wonderful acting and directing for these scenes to come off as so real. I highly recommend this film. Watch the trailer below and let me know what you think. If you have seen this film, please comment and let others know what you thought of this film. As for me, I am now a big fan of Fred Vogels, and will be eagerly awaiting his next project!
CLICK HERE to watch the trailer for MURDER COLLECTION V. 1
CLICK HERE to purchase the MURDER COLLECTION V. 1 DVD
CLICK HERE to go to the TOE TAG PICTURES official website
Posted by ZOMBIE HAYES at 8:24 PM