Check out the trailer for Albert Pyun's newest film, BULLETFACE 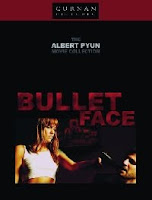 A while back I made a post about Albert Pyun's newest film BULLETFACE. (CLICK HERE to see the original post). Now, a full trailer has been released, and I have to say, this looks like a it is going to be a lot of fun!!
Here is the Synopsis from the Quite Earth website:
The story is set along the Mexico/California Border, principally in Imperial Beach, CA. It concerns a female DEA agent, Dara Maren, who, in protecting her petty criminal younger brother, gets herself arrested and imprisoned in a nightmarish penal colony outside Tijuana. While she’s in prison, Dara’s brother is murdered by a drug lord who’s creating a new DNA-altering drug made from human spinal fluid… tapped from the living.Hundreds of dead bodies are turning up along the Border, and the drug addicts become something less than human. The drug is so addictive that even law enforcement and government officials are on the stuff. A rogue FBI agent bribes the prison officials to let Dara out to avenge her brother’s murder as well as bring down the drug lord in ways the Feds cannot. When Dara comes out of prison, she is not the same person who went in. The catch? She only gets a 60-hour get-out-of-jail card and must return to the prison to serve out her 20-year sentence, or the FBI agent, who got her out, must take her place.
BULLETFACE is being released on an amazing 5-disc set! The set includes the following:
-Bulletface: Feature Film in widescreen and 5.1 soundtrack DVD
-Bulletface: Special Director's Commentary Feature Film
-Bulletface Original Music Soundtrack + Songs by Elyzium CD
-Left for Dead: Inferno Version Feature Film DVD
-Left for Dead Original Music Soundtrack CD.
This set is already a steal at the regular price of $29.99, but if you order through the
Quiet Earth website before March 5th, you can get your own copy of BULLETFACE for
50% off!! That is not a typo! HALF PRICE! CLICK HERE to order now!
CLICK HERE to watch the trailer for BULLETFACE
CLICK HERE to order the 5-Disc Special Edition of BULLETFACE
CLICK HERE to visit Albert Pyun's official website
Posted by ZOMBIE HAYES at 4:10 PM