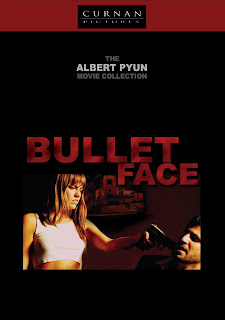 My buddy Scott posted on his blog about Director Albert Pyun's new film, BULLET FACE. He asked me to share this with the readers of my blog as well to help get the word out about this cool sounding film from Mr. Pyun. Here is the basic plot synopsis from imdb.com:

Horror and Revenge drive this thriller set in the sex and human trafficking underbelly of a nightmarish city where spinal fluid has become the drug of choice...with frightening consequences.

Ok...I'm sold! That sounds very interesting and I will be checking this film out for sure! Here is a snippet from an article from QuietEarth.us about the BULLET FACE 4-DISC DVD that will be released soon:
From now on, every film released by Albert will be director's cuts, lavishly presented in multi-disc sets as part of a new "The Albert Pyun Movie Collection" from Curnan Pictures. Not only that, but each film will include a "bonus" re-release. Bulletface for example, includes a revised version of Left for Dead, while Albert has told us that he may re-release his cyberpunk actioner, Nemesis, in an all new re-imagined version. And I frickin' love Nemesis, so that would be sweet.
Check out the full article HERE.
Posted by ZOMBIE HAYES at 11:12 AM