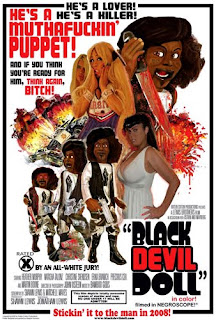 I finally got around to watching BLACK DEVIL DOLL, and while this movie won't win any acting awards, I must say it was a lot of fun. The film is directed by Jonathan Lewis, and the plot is as follows (from the official website):

Heather thought that a Ouija board was nothing but an innocent child's game. Little did she know, this child's game would open a flaming door to hell and re-animate the soul of a recently executed black militant serial killer! With his spirit now trapped in the body of a trash-talking ventriloquist doll, Heather and her friends must fight off the unrelenting horrors and unspeakable deviant advances of a three foot killer with a taste for young flesh and warm blood. Can they stop the BLACK DEVIL DOLL?
The running time for this film was only 72 minutes, which was perfect for this type of film. It was made to just be plain fun, and that is what it was. It was not too long and never takes itself too seriously...or seriously at all! The movie was full of great one-liners, almost exclusively from the Black Devil Doll himself. Along with the comedy, there was also a nice amount of gore for us horror fans....especially the throat slicing scene. This was done by a special effects team that definitely knows their makeup and effects and how to put them to good use. The movie was made as a throwback film reminiscent of the Grindhouse and Blacksploitation films of the 70's, and they hit that vibe right on the mark.
This is fun film for anyone that likes their movies with lots of blood and a naked chick or two (or 5) thrown in for good measure! Enjoy...just make sure the kids aren't anywhere near! This is definitely for adults only!
CLICK HERE to watch the trailer for BLACK DEVIL DOLL
CLICK HERE to visit the official BLACK DEVIL DOLL website
Posted by ZOMBIE HAYES at 9:30 PM