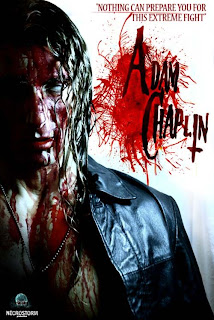 
I'm not sure how I came across ADAM CHAPLIN, but I knew nothing about this film going into it and I really haven't heard much about this film.  This surprises me, because this is a film I would think more people would be talking about.  I see "cult classic" all over this film!
For those not familiar with the film, here is the plot from the film's official website:

Set in the fictional country of Heaven Valley, the film is the story of a man, Adam, who following the suspicious death of his wife begins to investigate her murder and in doing so, discovers the involvement of local mafia boss: Denny Richards.Unable to trust the police, corrupt and controlled by Denny, Adam, consumed by anger, summons a demon who offers him superhuman strength and dark powers. The demon follows him during his trip, promising to lead Adam to the door of the murderer if he does everything the demon asks. This unleashes a bloody war that will bring Adam, the demon on his side, against the police department with all its dark allies. The fight begins and it will be extreme!

A lot of films claim to be "The Most Bloody Movie Ever Made", as this film does on the cover of it's DVD, but this is one of the few that could actually take that title.  Saying the film is bloody is an understatement. This film is extremely bloody and violent, with crazy gore that has to be seen to be believed.  I guarantee you have not seen anything like this before.  Gore and violence that you would think could only be drawn on the pages of a graphic novel come to life on screen.  While I was watching it I remember thinking that it was as if I was watching a live action comic book.

Now I do have to admit, the plot was a little confusing and unclear at times, but you don't watch this movie for the story line.  This film is all about the violence and gore and it delivers that on many levels.  I kinda liken this film to Peter Jackson's BAD TASTE.  That film is not that great story wise, but that film is a fan fave among horror fans for the over the top effects.   ADAM CHAPLIN, to me, should be in this same category of film.  This is the film film for writer and director Emanuele De Santi according to his imdb.com page, so for this being a first film for a director, I would say Mr. De Santi has hit a home run in his first up to bat!   I can't imagine the great films that are in store for us if De Santi keeps on making horror films!

Do yourself a favor and check out ADAM CHAPLIN, available now on DVD.   The DVD includes 5 great documentaries in the special features section including: