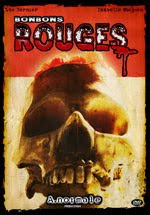 On Halloween night, the rules are simple. House lights bring the kids to get candy. But, when it gets late and really dark, the rules change...

Let me preface this review by saying this is not a high quality, big budget film. It is a very low budget, independent film made by Horror fans, for Horror fans. What is lacks in production values and film quality, is totally made up for with its spirit and overall entertainment value.

The film can be confusing at times when it comes to the plot, as there are a lot of things going on within the film, but don't let that be a distraction to you. Sit back and enjoy the creepy images this film has to offer. One of the coolest things about this film, is seeing all the cool horror memorabilia throughout the film. You will see cool horror movie posters, as well as comics, and toys from all different Horror franchises. The inclusion of all things things let me know from the start that the makers of this film weren't just making a Horror film for some quick cash, but rather because they are true fans of the Horror genre.

The film hosts a little gore, with one of the greatest scenes involving an wooden spike impaled through the mouth of a certain victim, an obvious reference to the cult classic, CANNIBAL HOLOCAUST. Gore isn't the main focus here, as the focus tends to rely on mood and imagery, most of which is very creepy and unsettling!

The acting in this film is excellent. Much better than the caliber of acting you would expect from such a low budget film. The couple in the film had amazing chemistry and were very believable as a couple.

As with all the A.Normale films I have seen, this one also throws a bit of humor into the mix, although dark humor at times. Humor is never the focus with their films, but it is thrown in throughout the film and mixes perfectly with the Horror elements of the picture.

Overall this is a fun, entertaining film that I would highly recommend to all fans of low budget, independent films.

The DVD includes tons of special features, including: