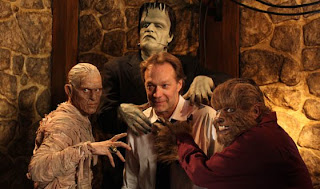 Greg Nicotero, the "N" of KNB FX (the greatest special effects company) has recently directed a short film titled, UNITED MONSTER TALENT AGENCY. The video was released on AMC's website. Mr. Nicotero is the Special FX Make-Up Designer for the upcoming series, THE WALKING DEAD, which premeires Halloween night on AMC.
The concept for UMTA is simple, and is a fresh idea on some familiar monsters to us all. The idea is that the classic Universal monsters such as The Wolfman, The Mummy, Frankenstein, Dracula, and The Gill-man are actually real monsters that were used in the filming of their movies. UMTA represents the monsters and keeps them under control while they are not being filmed. This is a very funny short that features all your favorite old monsters. Genre vets Eli Roth, Robert Rodriguez and THE WALKING DEAD's Frank Darabont all make special guest appearances! This is a must watch!
CLICK HERE to watch UNITED MONSTER TALENT AGENCY courtesy of amctv.com
Posted by ZOMBIE HAYES at 8:36 PM