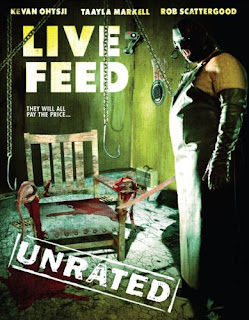 I’m not a big fan of torture films overall, so when Hayes asked me to review Live Feed, I was somewhat hesitant. Don’t get me wrong…I like gore in my horror films…in fact, I love it. But there’s just something about torture flicks that don’t do anything for me. This is one of the reasons I did not like Hostel.

Thankfully, though, Live Feed turned out to be much better than Hostel, and I enjoyed watching it. The plot of the film, according to the back of the DVD, is this:

A group of five young tourists, traveling in Asia, realize that the thoughtless acts of one will bring horrific consequences that none of them could have ever imagined. Upon entering a movie theater, little do they know that they have crossed into a living hell: a place where a sadistic Crime Boss entertains his fetish for voyeurism and flesh, with “live feed” images from the VIP rooms. Graphic and gruesome action-packed scenes play out as these friends fight for their lives against the Boss and his executioners. Before the night is over, few will survive and a shocking twist will leave you in disbelief.

I have to admit: this was a fun film to watch. The acting is not superb, but the cast does a decent enough job, well enough so that it doesn’t detract from the experience. And although the subject matter is pretty dark, director Ryan Nicholson does a good job of throwing some tongue-in-cheek dialogue in to help lighten the mood every now and then.
Shot on location in a real porn theater, this film conveys the true sense of ‘underground cinema’. The scenes are dark and gritty, and the whole ‘creepy surroundings’ overtone is evident throughout. I wouldn’t be surprised if a few of the movie patrons in the film were actual movie-goers that the production team added to the cast.

I truly love the death scenes in LIVE FEED. Even though I don’t like torture, I sure do appreciate a unique demise for a character. One of my favorites from this film occurs when one of the executioners rams a glass tube into a girl’s mouth and then forces a live snake down into it. Then, after the snake is inside of her, they staple her mouth shut. Gruesome and certainly cringe-worthy!

My only complaint about the film is that there’s no real twist in the plot, like the DVD cover suggests. There is a possible attempt at one (I won’t go into detail so you can watch it), but it is never really fleshed out. Still, though, the concept and writing are good and the film is shot very well.
Overall, I like LIVE FEED and think it is certainly worth checking out. But make sure you eat before you do…otherwise, you might not have an appetite afterwards.
CLICK HERE to watch the trailer
CLICK HERE to purchase the DVD
Posted by ZOMBIE HAYES at 8:25 PM