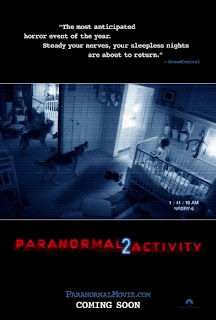 I just returned home from watching PARANORMAL ACTIVITY 2 and I have to say that the follow-up to last year's hit holds up well, if not surpasses the original film. While not without it's flaws, it still manages to be one of the best Horror films of the year, hands down.

I wont go into to much about how this film is related to the first, but the filmmakers did a remarkable job tying the two films together. One of the greatest aspects of both the first film and this film is the acting. The people you see on screen don't seem like actors. They seem like real people that you are watching horrible events happen to, and their distress and concern looks absolutely genuine.
While not as "fresh" feeling as the first film, I think part 2 was scarier overall with more "jump scares" than the original. While we had seen a lot of the activity before (doors slamming, random objects moving by themselves), it was still creepy to see these things happening again to a new couple. The demon seems to be up to his old tricks again and shows off some new things we haven't seen before. One of the scariest and unnerving scenes is when the unseen demon is keeping the young mother from reaching her child who is crying in his crib. I wont say more than that, as I don't want to ruin this for anyone who hasn't seen it, but it will grab you with intense fear, as you can see that this demon is totally in control.
As you can see from the trailer, a young baby is involved, which adds to the creepiness of the film. Those of us with kids will be especially unnerved at the scenes involving the young child, chilled with thoughts of anything like this ever happening to our own children.
If I had to find fault with the film, it would be with the ending. While the ending was good and fit well with the film, I still find it lacking and somewhat anti-climatic. This was probably due to the fact that the biggest scare from the first film came in the final seconds of the film as the body of Micah is instantly thrown directly into the camera. I guess I was expecting something even bigger at the end of this one but it actually ended somewhat quietly.
Don't let that take away from the fact that this was still a remarkable film that every Horror fan should check out before it leaves the theaters. Not many sequels are as good as the originals and certainly aren't any better, but this is not your ordinary sequel. The filmmakers have a couple of great films under their belt so far, and I can see this becoming a franchise with at least a few more stories to tell. Check this one out asap!

CLICK HERE to watch the trailer for PA2
Posted by ZOMBIE HAYES at 9:41 PM