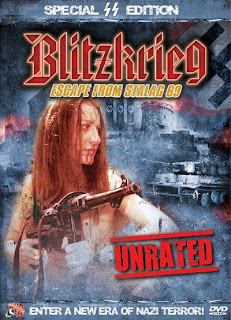 BLITZKRIEG: ESCAPE FROM STALAG 69 was produced, written, and directed by Keith J. Crocker and released by Wild Eye Releasing. Some might remember Mr. Crocker from his past feature film, THE BLOODY APE. This time around, Mr. Crocker goes from a creature film to the forgotten genre of the Nazi exploitation film, in the likes of ISLA: SHE WOLF OF THE SS, SS HELL CAMP, etc. Here is the basic plot from imdb.com:

Enter Stalag 69, where torture is just the Beginning for this bloody band of Nazi Butchers! Germany, 1945. Stalag 69, a POW camp ruled by the sadistic SS commandant Helmet Schultz, is nothing but a blood-soaked playground for this perverse Nazi monster who uses his American, Russian, and British prisoners in cruel and ghastly biochemical weapons experiments. When a group of young, wanton USO girls are captured and fall into the hands of Schultz and his battalion of butchers, the brutality is turned up and the unsuspecting girls are gored, gouged and ground up - all for the pleasure of Schultz and his SS brothers and sisters. Now it's up to the rag-tag survivors of the camp to strike back against their captors and Escape from Stalag 69, alive or on a slab!

BLITZKRIEG is a welcome return to the Nazi exploitation films of the 60's and 70's. The acting is pretty good throughout the film and the blood and makeup effects are excellent. Crocker spares no expense when it comes to recreating the torture scenes reminiscent of Nazi films prior. The Horror the Nazi's shell out to the prisoners is horrible...but it doesn't compare to the Horror that the prisoners give back when they extract their revenge on the Nazi soldiers!
The film is paced pretty well, although I do think a minor flaw is that the film might be a little long. Clocking in at 135 minutes, I feel that there were a few scenes that could have been edited out for a shorter run time. That is just my opinion though, so take that for what it is worth. Overall this was a very fun, entertaining film, which is what every film should be. This film was a vast improvement over Mr. Crockers previous effort, and I look forward to any future projects he is involved with!
The DVD itself is packed with special features, including commentary, trailers, deleted scenes, bloopers, production stills, and more!