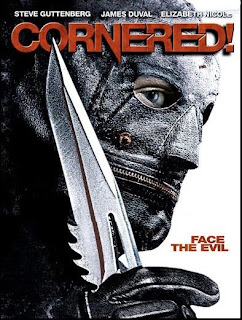 I recently had the opportunity to check out the great slasher film, CORNERED! The film was directed by Daniel Maze and is being distributed by Phase4Films. Here is the basic plot from the Phase4Films website:

During their nightly poker game, a group of lowlifes are terrorized in their own convenience store by a masked killer as players begin to disappear one by one. Be warned & watch what you say… someone may be listening!
It seems that there have been quite a few good 'ol Slasher films coming out on DVD lately. This is a very welcomed trend, and I hope to see it continue...especially if the Slasher films are as good as this one. CORNERED is a throwback to the slasher films of the 80's but manages to stay fresh and bring something new to this saturated sub-genre of Horror films.
When the movie starts, the employees are getting ready to head upstairs for their game of poker, but as they are buying their snacks and drinks, they begin to discuss a killer that is on the loose in their city that has been targeting convenience stores and their employees. Their conversation turns to what they would do if they caught him in their store. Each one tells how they would kill this serial killer. Well, when the killer traps them in the store, and starts offing the employees one by one, he turns their ideas back on them, killing each one in the way that they had mentioned. I won't say anymore, as I really don't want to spoil this one for you.
The acting in this film is excellent....I don't remember a bad actor in the bunch. Most of the actors I had never seen before, although you will recognize James Duval from his many films and, of course, Steve Guttenberg. Guttenberg is as likable as ever, although can you ever look at this guy without seeing Sgt. Mahoney?
The pacing of this film is perfect, with almost no slow points and action and suspense throughout. The kills are violent and very bloody. This is a great slasher film that stays true to the genre, yet brings its own uniqueness with it. I would highly recommend this film for any Horror fan.
CLICK HERE to watch the trailer
CLICK HERE to purchase the DVD
CLICK HERE to view the official CORNERED! movie site 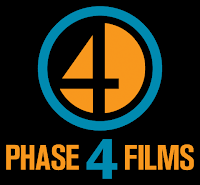