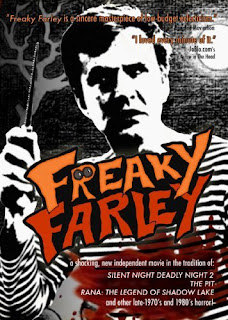 I just watched the movie, FREAKY FARLEY, and I liked it...I think. Hmmm...before I go any further, here is the basic plot from the ShockMarathons website:

Farley Wilder is a legend in his small New England town. He has no friends. He never left for college. Every decision is made for him by his controlling father. And one of his favorite hobbies is spying on women as they undress, helping him to earn the nickname Freaky Farley.
Things begin to change when Farley meets Scarlett, a lovely, confident young woman who helps to bring him out of his shell. Together, Farley and Scarlett will explore the darker side of their small town, eventually unlocking the mystery of the evil Morgantown woods—which, in turn, will unlock the maniacal rage that rests deep inside of Farley.

This might be one of the hardest reviews I have ever had to write, because this is such a strange movie to describe. Is it a Horror movie? Is it a comedy? Is it a drama? The answer to all these questions is....I really don't know! I don't know what this movie is, but overall, it turns out I can't help but like it. The DVD case says it is a "shocking independent movie in the tradition of: SILENT NIGHT DEADLY NIGHT 2, THE PIT, and RANA: THE LEGEND OF SHADOW LAKE and other late 1970's and 1980's horror". I didn't really see anything in this film that was shocking, and I am not sure how this movie compares to those listed. I would compare this film more to a Horror version of NAPOLEON DYNAMITE. I liked ND, but I couldn't really explain the plot to you, and I don't really know what the purpose of the movie was, but I was still entertained by it. It was full of weird, eccentric characters that you couldn't help but like. That is the case here with FREAKY FARLEY. Farley is as weird of a person as you will ever meet, but you can't help but like him. There are also other characters thrown in that you don't/won't/can't understand, but it makes for a fun movie. I am specifically thinking about the Ninja guy from this film....something you will just have to see for yourself.

Actor Matt Farley does an excellent job portraying "Freaky" Farley , as his friends call him. His acting is pretty good in some spots, and then just downright awful in other parts of the film, which just adds to the weirdness of this film. Maybe that was done intentionally to set a weird vibe for the film...if so, nicely done! The real bright spot in this film in terms of acting was actress Sharon Scalzo, who plays Farley's girlfriend Scarlett. Her acting is spot on and is one of the most likable characters of any movie I have seen in a while.

The movie starts of slow and the acting is very questionable in the beginning, but it does get better as the movie goes on, or maybe you just get used to it. But either way it seems to get better. As much as I didn't want to like this movie as I watched it, I couldn't help but continue to watch and be entertained by it, which in the end is the sole purpose of a movie, to entertain.
Don't go into this film expecting a scary, shocking, gory Horror movie. Instead expect a good film with many likable characters with a subtle splash of Horror aspects thrown in.
While this film is not for everybody, it has enough in it to entertain most.