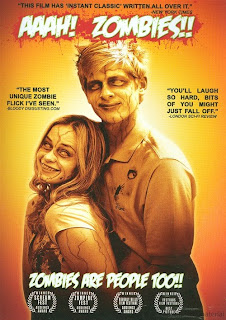 There’s nothing quite like horror-comedies. They’re like getting the best of both worlds: you get to laugh at one scene and then squirm at the next. And for that, I absolutely love them (well, when they’re good, anyway). AAAH! ZOMBIES!! is definitely one of the good ones.

The plot is simple in idea but somewhat complex in the movie’s execution:

The U.S. military, intent on creating a super-soldier formula, accidentally creates a serum that kills people but then reanimates them as zombies. A single barrel of the serum is accidentally lost in transit to disposal. Four teens are then unknowingly infected by the serum and thus turned into the living dead…but they don’t realize what has happened. In their eyes, the rest of the world has gone crazy, as every person they encounter tries to kill them. The four enlist the help of a similarly infected Army Private in an attempt to learn the truth about their condition.

This film is excellent and has it all: great cinematography, excellent story, talented cast, and superb special effects. What makes it truly unique however is how it tells the story through the teens/zombies’ eyes. Half of the film is done in monochromatic black-and-white…this is the actual world, or how the common person sees things. The other half is done in color…this is the world as seen through the teen/zombies’ eyes.

The result is a humorous journey into craziness. The teens/zombies think they’re normal, which is illustrated by their normal conversations and interactions (in the colorized scenes)…but then we see things how they really are (in the black-and-white scenes) and see the zombified teens just staggering around, grunting and moaning incoherently. As I mentioned above, it’s somewhat complex in the execution, but director Matthew Kohnen does a masterful job of making it simple for the audience to watch.

I can’t really describe the plot anymore without giving key elements away, so I’ll just leave it at this: you’ve got to simply watch this film to appreciate it. AAAH! ZOMBIES!! is pure genius, plain and simple. It’s very well written with lots of witty dialogue and dark humor. One of my favorite scenes is when one of the teens/zombies rips the arm off of a bully and then starts beating him with it, yelling out “Why are you hitting yourself?” over and over.

If I were forced to find any negatives about this movie, I would have to admit that the corky love-story between two of the characters is almost a detraction from the movie’s overall tone. It sometimes becomes distracting, while at other times simply annoying. But it’s nothing that can’t be overlooked, at least from this reviewer’s standpoint.

AAAH! ZOMBIES!! is a fun, extremely entertaining romp that will keep you laughing. It’s a true testament to the zombie genre and one that I’m proud to add to my DVD collection. This is one you will want to check out for sure.
CLICK HERE to watch the trailer
CLICK HERE to buy the DVD
CLICK HERE to visit the AAAH! ZOMBIES official website
h