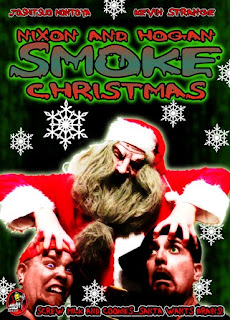 NIXON AND HOGAN SMOKE CHRISTMAS is the first feature I have seen from the low budget production company, Hack Movies. I didn't really know what to expect from writer/director Kevin Strange, and in fact, I'm still not quite sure what I have seen even after watching this film!
Here is the basic plot from the Hack Movies website:
It's Christmas eve in Strangeville. The demented duo, Nixon and Hogan, have asked Santa for some sweet, sweet ule tide weed for their favorite holiday. Unfortunately, Santa mixes up the Christmas weed with Voodoo Zombie weed and smokes himself Undead! Now it's up to our dim witted heroes to finish Santa's delivery route or face the end of Christmas as we know it! Will Nixon and Hogan save Christmas? Or will Sasparilla the weed witch succeed with her plan to murder Santa and wreck the collective facial area of everyone in Strangeville by turning every holdiay into Sasparilla day? Expect the kind of bent humor and gore only Hack Movies can deliver with this, the 6th feature film from the Mayor of Strangeville, Kevin Strange, and the rest of the Hack Movies crew piece!
This is movie is hard to explain. In a word, it is just plain weird! Although, looking at some trailers for other Hack Movies, I guess this movie isn't weird at all if you are familiar with their previous films. The film is a stoner comedy, the the vein of HALF BAKED, or the CHEECH AND CHONG movies of the late 70's and early 80's, but with a Horror twist.

The plot of the film sounds simple enough, but it just doesn't make sense at some points and some of the creatures that pop up in the film just seem out of place, or at least aren't really explained as to why they are there. The makeup effects on the monsters and Zombie Santa are cheap, but effective as a whole.
The acting in this film is actually very good, surprisingly good really. The only problem is the over acting and the weird accents/mannerisms used by many of the characters. All the actors sound funny in their own way, but sometimes its as if they are trying a little too hard to sound funny. While funny at first, it does get a little annoying after a while. The best thing overall about this film is the dialog, which can be very humorous at times.

NIXON AND HOGAN SMOKE CHRISTMAS is an obviously low budget film, but writer/director Kevin Strange does the most with the little he has and actually puts together a somewhat decent film, although it definitely has a target audience and may not be for everyone. The stoner types out there will probably love this film and will probably make this their new Christmas film to watch each year. For the rest of us, this one is worth a watch, but it definitely will not be going into my annual Christmas movie rotation.

NIXON AND HOGAN SMOKE CHRISTMAS DVD features over 4 hours of special features, including 2 audio commentaries, 5 behind the scenes videos, bloopers, and more!
CLICK HERE to watch the trailer
CLICK HERE to purchase the DVD