Check out the trailer for THE CRAZIES remake 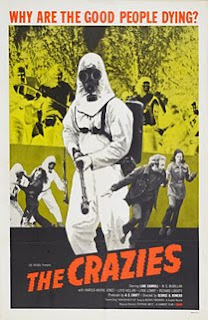 Just released is the long awaited trailer for the remake of George A. Romero's THE CRAZIES. While some are saying this can not be as good as the original, I will be going in with an open mind having yet to see the original (the DVD of the original is on my ebay watch list!). I think this trailer looks terrific, lots of suspense and chances for some good gore scenes. Just for fun, I went and watched the original trailer (link included below) after watching the new trailer just to compare. The original trailer looks great, but it is dated and looks like a perfect candidate for an update. The plot is simple and revolves around the inhabitants of a small Iowa town who are suddenly beset by death and insanity after a plane crash lets loose a mysterious secret biological weapon into the water supply. The film is planned for a theatrical release on Feb. 26th, 2010.

Click HERE to watch the trailer for THE CRAZIES remake

Click HERE to watch the trailer for George Romero's original 1973 film THE CRAZIES
Posted by ZOMBIE HAYES at 7:03 AM