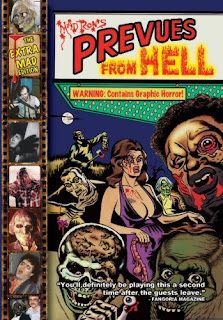 Virgil Films & Entertainment just recently released MAD RON'S PREVUES FROM HELL onto DVD for the first time ever! I had never seen or heard of this title before now, but apparently it was quite a popular video back in the VHS days. The film is a trailer compilation of 47 different Horror and Exploitation films, but what makes this compilation different from all the others, is that it is actually a movie within itself. Lets see if I can make this make sense....lets start with the synopsis from imbd:
Deranged projectionist Mad Ron shows a movie theater full of rowdy zombies a diverse assortment of horror and exploitation film trailers from his private collection while ventriloquist Nick Pawlow and his foul-mouthed zombie dummy Happy Goldsplatt provide lowbrow comic relief.
The movie stars Nick and the first Zombie ventriloquist dummy that I have ever seen named Happy. They are in the projectionists booth of a theater with Mad Ron. Zombies invade the theater and sit and watch trailers that Mad Ron plays for them. Nick and Happy do a comic routine, then they show a few trailers, and then they cut back to the Nick and Happy talking about the films and the Zombies in the theater. The previews are the main event here though, with titles ranging from mainstream (THE TEXAS CHAINSAW MASSACRE, NIGHT OF THE LIVING DEAD to more lesser known films such as HORROR ON SNAPE ISLAND, BLOODEATERS, and THE HOUSE OF EXORCISM, just to name a few.
All the trailers are a treat to see, of course, but the theater full of Zombies and the comic routines of Nick and Happy are a real treat too. The Zombie effects are actually very well done for what looks to be a pretty low budget feature overall. The film was made in the 80's and it definitely shows, although that is not a bad thing at all in this case. The video quality is good, but you can definitely tell it is a transfer from a VHS and it gives the look and feel of watching a VHS movie, something I have not done in years! It was actually very cool and very fitting since the movie was made in the 80's, to watch it as if you were watching a VHS tape. It brought a sense of nostalgia and reminded me of the days of my childhood, riding my bike down to the local Mom & Pop video store to browse the Horror isle. Also, with the movie being made in the 80's, you get the cream of the crop here when it comes to the trailers they show. Every trailer is a classic and worth seeing.
While there are a lot of trailer compilation DVD's out there, this is by far my favorite of the bunch. Mad Ron and his Zombie pals add something to this trailer compilation that many others are missing....FUN!
CLICK HERE to watch the trailer
CLICK HERE to purchase the DVD from Virgil Films & Entertainment
CLICK HERE to visit the official website of Virgil Films & Entertainment
Posted by ZOMBIE HAYES at 8:29 PM