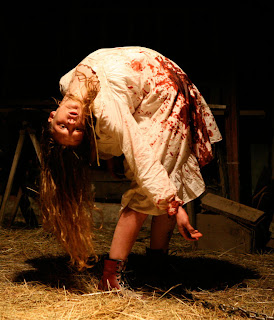 I finally got a chance to see THE LAST EXORCISM last night, and I must say that this was one of the most enjoyable Horror films I have seen in the theater in a long time. For those of you that aren't familiar with it, here is the full synopsis from the imdb website:

The Reverend Cotton Marcus had performed more exorcisms than he could remember before he visited the Louisiana farm of Louis Sweetzer. That would be a day he wouldn't soon forget. The last person Lious Sweetzer ever thought he would invite to his farm was an exorcist. But his young daughter Nell had been acting so strange. He could think of no other explanation for her behavior than possession by demons. But many long years of attending to those with questionable spiritual infestations has left Cotton a broken man. The faith he once proudly held up as a shield against evil had deserted him long ago. This day has brought Reverend Marcus to the Sweetzers farm where he plans to film a documentary of what he hopes to be his final exorcism. All of his past experience could not begin to prepare him for the terror that lay within. But upon arriving at the already blood drenched family farm, it was soon clear that nothing could have prepared him for the true evil he would encounter there. The Reverend must call upon a near-empty well of faith to protect Nell, his film crew and ultimately himself.


This movie is very well made and the acting is wonderful. It is shot in a documentary style with a hand-held cam style of filming. Rev. Marcus is played very convincingly by Patrick Fabian while the possessed girl, Nell, is played by the excellent Ashley Bell. Nell comes across as one of the sweetest girls you could ever meet, and the viewer finds it hard to believe that she could pull of some of the horrible acts that she is being accused of by her father. Her father's livestock is being slaughtered and he is convinced that Nell is who is doing it. Nell's father then calls in Rev. Marcus to perform the exorcism.

What sets this film apart from the other batch of exorcism films is the fact that the man performing the exorcism, doesn't even really believe in it. Rev. Cotton admits he is a "fraud" so to speak. He admits that what he does is all for show and he even shows you some "tricks of the trade". He justifies doing this though, by saying that usually when someone is "possessed", that it is all mental. If he can come in and perform his act (literally) of exorcism, and it has a psychological effect on the person and they believe they are not possessed anymore, then he has done a commendable service to that person. Either way they believe they are not possessed anymore, so he has done his job. He admits that he does it for the money, because as he says in the film, "The church can't function on love alone".
Seeing this fake exorcism at work is very humorous, but when Rev. Marcus sees that what he is dealing with might not be a psychological condition in the case of Nell, well that is when things get really interesting. Seeing the struggle of Rev. Marcus as he faces off against what he has convinced himself was not real, is a very interesting angle this movie takes.
This is one of the most memorable films you will ever see. This film will stay with you long after you have viewed it, which is the sign of a very well made film. Try to catch this film at the theater if at all possible...the surround sound is very important with this film, as hearing all the creepy sounds around you really adds to the enjoyment of the film.
CLICK HERE to watch the trailer and 3 clips from the film!
CLICK HERE to visit the official website of the film
CLICK HERE to visit the official blog of Rev. Marcus Cotton!
Posted by ZOMBIE HAYES at 7:33 AM