Here are this week's horror related DVDs and Blu-rays that come out tomorrow, 6/30:
(Click on a title to see a trailer for that film)

Posted by ZOMBIE HAYES at 10:18 PM No comments: 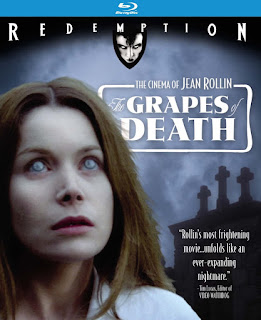 If you are not familiar with Kino Lorber and Redemption Films, you really need to be.  They have been putting out some amazing Blu-ray releases over the last few years, including lots of films from the late, great, Jean Rollin.    The latest release that I watched was THE GRAPES OF DEATH, one of the scarier and gorier films from Rollin's body of work.   Here is the basic plot of the film from the Kino Lorber website:

The polluted wine produced for a village's annual Grape Harvest Festival has left all but a few rabid with some chemically- engendered form of zombiism. They may saunter about like sleepwalkers, but these are not the zombies of George A. Romero's Night of the Living Dead (1968); they are, rather, oozing transmitters of an impassioned insanity that can only be termed anarchy.

This is a very interesting film, as the "zombies" are caused by a physical sickness, one that turns their skin into oozing mounds of puss and blood.  Yes, that is gross for sure, but seeing it on film is even worse!   Rollin did an amazing job with this one, greatly increasing the amount of blood and gore that are usually found within his films.

If you've never seen a film by Jean Rollin, this is a great on to start with.  THE GRAPES OF DEATH is available now on Blu-ray from Kino Lorber Entertainment and contains the following special features:

*  Mastered in HD from the original 35mm negative
*  Introduction by Jean Rollin
*  Interview with Jean Rollin, by Patrick Lambert and Frederick Durand (2007, 49 min.), in which Rollin discusses his varied literary influences
*  16-page booklet with an essay by Tim Lucas, editor of Video Watchdog
*  Original theatrical trailer
*  Original trailers of other Rollin films

Posted by ZOMBIE HAYES at 1:24 PM No comments:

Check out the newest trailer for Fli Roth's GREEN INFERNO

As most of you know by now, Eli Roth's newest film, THE GREEN INFERNO, finally got picked up for distribution and has a new theatrical release date of September 25th.   Hopefully it will be a wide release so we will all have a chance to see it.  I haven't been this excited for a horror film in a long time!
A new trailer was recently released, check it out and then let me know what you think of it.  Do you plan on seeing THE GREEN INFERNO in the theater? 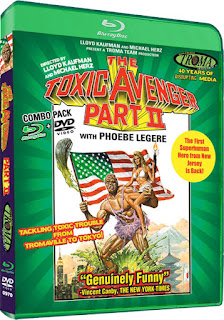 If you are a fan of Troma films, then you definitely know about the TOXIC AVENGER films.  This is probably the #1 film series I think about when I hear the word Troma.   The Toxic Avenger character is by far their most popular character and I would assume most profitable.  He is truly a unique super hero!   Now, I have to admit, I had only seen the first Toxic Avenger film before now, so I was very happy when I saw that THE TOXIC AVENGER PART II had now been released on Blu-ray!  Here is the basic plot of the film from the Troma website:

Toxie’s mean, green, and back on the screen! Melvin Junko was a nerdy 98lb weakling until he fell into a vat of toxic waste, turning him into the first ever superhuman superhero from New Jersey. This time the hideously deformed creature of superhuman size and strength takes on Tokyo. The Toxic Avenger Part II is a spectacular sequel with even more ingenious special effects, even more bizarre action, and even more unbelievably famous fight scenes. He’s come a long way from Tromaville, baby!

Now usually sequels are not nearly as good as the original, but I have to say that I think THE TOXIC AVENGER PART II is just as good as the first.  I loved this film from the very opening scene till the end credits.    Like most of Troma's films, the film does not take itself seriously at all.  It is a cheesy movie with crazy dialog and some corny humor, and the typical Troma style gross out humor as well.   What this movie had that I wasn't expecting, though, was some excellent gore!  Most of the gore is pretty over the top and ridiculously unrealistic, but there was some gore in this film that looked amazingly real and actually made me cringe at times.  Part II of this film series also gives us some crazy, over the top fight scenes.

If you were a fan of the original TOXIC AVENGER, you will definitely want to get your hands on a copy of this new Blu-ray.  THE TOXIC AVENGER PART II is available now on a Blu-ray/DVD combo pack and contains the following special features:

Here are this week's horror related DVDs and Blu-rays that come out tomorrow, 6/23:
(Click on a title to see a trailer for that film)

Posted by ZOMBIE HAYES at 8:08 PM No comments:

Here are this week's horror related DVDs and Blu-rays that come out tomorrow, 6/16:
(Click on a title to see a trailer for that film)

Posted by ZOMBIE HAYES at 11:24 PM No comments:

Here are this week's horror related DVDs and Blu-rays that come out tomorrow, 6/9:
(Click on a title to see a trailer for that film) 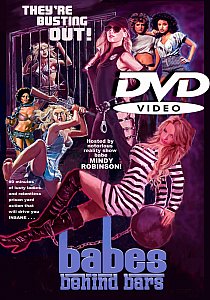 I am a huge fan of trailer compilations, and Full Moon Features Grindhouseflix line of dvds have been putting out some great ones lately.  The latest one I watched was called BABES BEHIND BARS.   This is a compilation of all the great "Women In Prison" flicks from the 60's, 70's, and 80's.
Here is some more info on the dvd from the Full Moon website:

Welcome to Babe Jail, where the best shower a girl can get is from the warden's hose, and interrogation always ends in intercourse! This outlandish compilation of trailers and clips spotlights the women-in-prison sub-genre of grindhouse exploitation films, which were most popular in the 70's and 80's. Hosted by the illegally-sexy “Roxie” and her demented ogre-of-a-cellmate, “Lavondra,” you've been sentenced to watch the best of the most degrading, perverse, and sadistically sexist filth ever sent to the slammer. The prison bars may be cold, but the babes are hot!

As I have mentioned before in reviews for trailer compilations, these are perfect for me due to my short attention span.   Plus, I could never watch all these films just due to all the time it would take, so this is a great way to get all the highlights and pick out a few that I really want to track down and see.  I thought I knew most all of the Women In Prison flicks out there, but this DVD showed me I was way wrong.   There are titles featured on here that I have never heard of in my life.   There are also all the more well knows ones such as BIG DOLL HOUSE, CAGED HEAT, and the ILSA films.

This is another great Grindhouseflix title to check out from Full Moon Features.   You can purchase the DVD below, or watch this and tons of other great grindhouseflix on Full Moon's awesome streaming service! 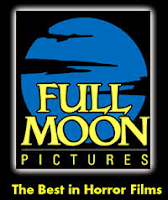 Posted by ZOMBIE HAYES at 11:08 PM No comments:

Wow...has it really been that long since I have posted on here?

Yikes, I just logged on to my blog and I see my last post was on May 28th!! I think that might be the longest I have gone without posting on my blog!  I'll blame it being my birthday last week and then the start of summer so it's getting to be a busy time with the kids.  I will try to be better and not go so long between posts, though!

Thanks for sticking with me!
Posted by ZOMBIE HAYES at 10:42 PM No comments: