Here are this week's horror related DVD/BD's that come out tomorrow, 11/28:

Posted by ZOMBIE HAYES at 9:25 PM No comments:

Here are this week's horror related DVD/BD's that come out tomorrow, 11/21:


Looks to be super slow week when it comes to Horror movie releases this week!  Will probably be slow through the holidays....

Posted by ZOMBIE HAYES at 10:00 PM No comments: 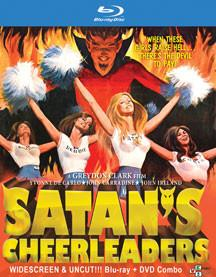 I always love coming across films that not only have I never seen, but that I have never even heard of!    SATAN'S CHEERLEADERS  is one of those films.   I'll be honest, as soon as I saw the cover art for this film I had a hunch I was going to like this film!   Here is the basic plot of the film from the VCI website:

Benedict High School's cheerleaders aren't shy and sweet. The football team knows them well – and Billy, the school's disturbed janitor, would like to. In the locker room, the girls shower and dress, unaware of the evil eyes which secretly watch them. They don't know that a curse has been placed on their clothes. And they don't know that their trip to the first big game of the season might sideline them for eternity. Will the cheerleaders succumb to the dark ritual of sexual sacrifice and death that's been plotted for them? Only those who dare watch will know!

I'll start by saying that I have a real fondness for 1970's horror films.  There are some really fun 70's horror films and this is definitely one of them.   I do have to admit that this film won't be for everyone, and as much as I liked it, there were some slow parts that even I could have done without.  The running time clocks in at 93 minutes, which doesn't seem to long, but some parts did seem to drag on at times.  I think a little tighter editing and something closer to a 83 minute running time could have really improved this film.  Even so, this is one you'll want to check out.

SATAN'S CHEERLEADERS is full of crazy characters and some really cheesy 70's dialog, but that is really what gives it a lot of it's charms.   I was also surprised at the lack of killing and gore...it has very little killing and no gore at all that I recall.  This film is more about the storyline than effects or scares. It's a fun tale that just gets crazier and crazier as the film goes on.

*  Behind the scenes Photo Gallery 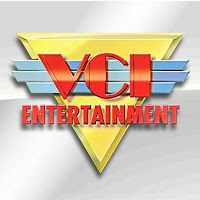 Posted by ZOMBIE HAYES at 5:42 PM No comments:

The classic arcade game RAMPAGE is headed to the big screen! 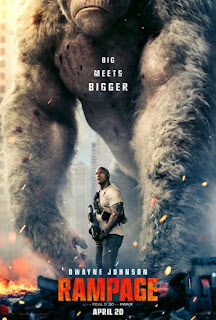 If you are a child of the 80's like me, chances are you grew up playing the arcade game RAMPAGE.  It was such a fun game with a very easy concept.....giant mutated animals destroying stuff.   Here is a brief description of the characters from the RAMPAGE Wikipedia site:

The game's protagonists are George, a King Kong-like gigantic gorilla transformed by an experimental vitamin, Lizzie, a Godzilla-like dinosaur/lizard transformed by a radioactive lake, and Ralph, a giant werewolf transformed by a food additive. As monsters, they need to raze all buildings in a high-rise city to advance to the next level, eating people and destroying helicopters, tanks, taxis, police cars, boats, and trolleys along the way

Now, a major motion picture is coming out based on the game and it looks like it is going to be tons of fun!  The film stars Dwayne "The Rock" Johnson  and Jeffrey Dean Morgan  (Negan from THE WALKING DEAD).

Check out the trailer and let me know what you think!   While it looks like it could be a bit cheesy, I think we are in for a fun time with some great monster mayhem!   RAMPAGE has a theatrical release date of 4/20/18

Here are this week's horror related DVD/BD's that come out tomorrow, 11/14:

Check out the trailer for ASH VS. EVIL DEAD Season 3!

Are you a fan of ASH VS. EVIL DEAD on Starz?  If so, check out the trailer for the upcoming 3rd season!   It premieres Sunday, February 25th on Starz!


Posted by ZOMBIE HAYES at 9:47 PM No comments:

Here are this week's horror related DVD/BD's that come out tomorrow, 11/7:


Greetings to all my fellow horror fans and 4H blog readers!  I want to apologize for the lack of posts lately.  It's a been a very busy last few weeks for me with some trips out of town, lots of evening activities for the kiddos, and just life in general.  I will try to get back to posting on a more regular basis as soon as everything calms down a bit!   Thanks for sticking with me and to show my appreciation....how about I do a FREE DVD giveaway soon!   This is one you will not want to miss out on....stay tuned!!

Posted by ZOMBIE HAYES at 10:07 PM No comments: