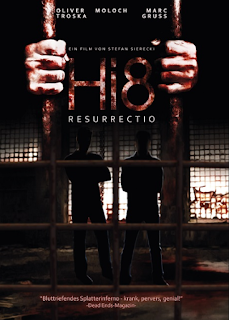 If you have never heard of Black Lava Entertainment, you are missing out on some of the weirdest underground horror films available today.   The latest one I have seen was called Hi8:  RESURRECTIO from filmmaker Stephan Sierecki.  Here is the basic plot of the film courtesy of the Black Lave Entertainment website:

In "Hi8“ we follow Steven, a film student who intends to create the goriest horror movie of all time, his graduation film. The only problem is the lack of money. Even his lecturer does not support his plans. He claims the horror movie to be a inacceptable medium and does not honor any artist. Steven is aware that it is difficult to distribute genre movies in Germany but hope dies last. A mysterious website discovered by one of his friends raises hope. A single line framed by flames appears on the screen: 'God's messengers fall into hellfire, the angels' Stephen is not bothered by this phrase for he is more interested in the text's content. His eyes are fixed on the words 'filming', 'money', 'prompt cash'. Clicking the 'Send'-button unleashes an experience which affects his mind, flesh and bones. He will literally witness hell on earth.

I had never heard of this film going into it, so I had no clue what to expect.   To me this film reminded me of a higher budget version of the AUGUST UNDERGROUND series, but a lower budget version of the HOSTEL films.  They are all in the same vein, though.  It basically follows Steven as he is kidnapped by the new "producers" of his horror film and is forced into a world of horror that Steven could have probably never imagined.  He is forced to torture and kill, all in the name of cinema!

The film is very well made, with what looks to be all practical effects, something I am always happy to see in horror films.   The acting is pretty good overall,  especially from the female victim that is caged and put through hell.   At times I actually wondered if they told her what all they would be doing and if some of the screaming and fear was actually real!

I'm not a huge fan of the torture films, but if you are into those films, you should definitely check this one out.   Hi8:  RESURRECTIO is available now on DVD and contains the following special features:

Posted by ZOMBIE HAYES at 10:37 AM No comments: 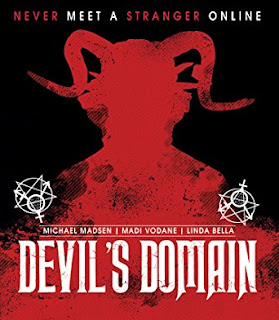 I knew nothing about this film going into it, in fact, I had never even heard of DEVIL'S DOMAIN.  It sounded like a cool concept, though, so I decided to give it a try!  I am not sure why I have not heard more about this film.  It is a cool film with some originality that is missing from a lot of today's horror films.  Here is the basic story from the film's imdb page:

Devil's Domain tells the story of Lisa Pomson, a troubled, social media obsessed teen, conflicted with her sexuality and her parents misunderstanding of her. When Lisa gets secretly filmed binging, purging, and masturbating the video goes viral and she suffers extreme cyber-bullying. Suicidal, and on the brink of insanity, a beautiful, mysterious stranger (the Devil) strikes up an online relationship with her. They grow close and meet and the stranger offers to help in exchange for a favor. The devil will rid her of the bullies and give Lisa fame and fortune in exchange for a baby. Lisa agrees and as the bullies die one by one, Lisa's conscience kicks in and she regrets doing the deal. To keep Lisa in line, the Devil threatens eternal suffering and the death of her loved ones until she finally succumbs to give the devil a baby that will grow to reign terror upon the world.

The film is like a darker FINAL DESTINATION entry with each of  Lisa's bullies dying one by one, each on in a unique and sometimes grotesque way!    The acting is great here, especially from newcomer Madi Vodane  who plays the main character Lisa.  She does an excellent job as the tormented teen, Lisa.

One of my favorite parts about this film are the effects.  The filmmakers rely on almost all practical effects which is very rare these days, but it makes a film so much more believable and likeable in my opinion.   It was great to see some good gore in a horror film again.  That is one of my main complaints with horror films these days, most are very light on the gore for some reason.

DEVIL'S DOMAIN was very enjoyable and entertaining film that I highly recommend.

DEVIL'S DOMAIN is available now on DVD and Blu-ray from Cleopatra Entertainment and MVD Visual.   Bonus features include the following:

Posted by ZOMBIE HAYES at 8:23 PM No comments:

Here are this week's horror related DVD/BD's that come out tomorrow, 12/19:


Posted by ZOMBIE HAYES at 8:46 PM No comments: 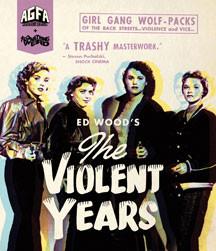 When I saw the name of this film was ED WOOD'S "THE VIOLENT YEARS", I was assuming he directed the film.  It turns out, Ed Wood was the writer for this film.  The movie was directed by William Morgan, which probably explains why the film was not nearly as bad as I was expecting it to be when I was assuming Wood was the director!   Don't worry though, if you are a fan of Ed Wood's awful films, this one will still be a hit with you!  Here is the synopsis from the MVD website:

Well, first off I have to mention that I know this isn't really a horror film.  So what's it doing on horror website you might say?  Well, as mentioned above it was written by Ed Wood, and that's a good enough reason for me.  Wood is known for directing some awful films, but I have to tell you, he's not much of a writer either!  Ha!   In fact, the dialog is one of the best things about this film.  It's really bad, but in a "so bad, it's good" kind of way.  I knew I was in for a treat when a group of men were talking about the violent spree the  group of girls were on and one said "When will these kids learn"?   The other man's response was "These aren't kids, they're morons"!   Ha!  Classic Ed Wood dialog right there!

Another thing I loved about this film were the effects, or lack thereof.   Anytime someone got shot, there was no blood or even a bullet hole, they would just hold their hand over where they had apparently been shot and fall to the ground.   It was confusing at times because I didn't know if they had actually been shot or not, but I just took their word for it!  Ha!  This movie is no masterpiece by any means, but it does have a certain charm to it.  It kept me entertained the entire running time, so that's good.  Although I must note the running time in only 65 minutes, so I'm not sure if I could have made it if it was any longer!

THE VIOLENT YEARS is available now on Blu-ray from AGFA and MVD Visual and contains the following Special Features:

Posted by ZOMBIE HAYES at 8:28 PM No comments:

Here are this week's horror related DVD/BD's that came out today, 12/5: