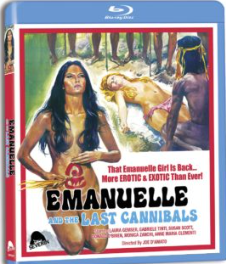 There are so many great sub-genres of horror, but one of my all time favorites is the cannibal film.   The cannibal films were huge back in the 70's and early 80's, with such classics as CANNIBAL HOLOCAUST, CANNIBAL APOCALYPSE, and CANNIBAL FEROX just to name a few.  In 1977 the EMANUELLE series of films joined the group with EMANUELLE AND THE LAST CANNIBALS.   Here is the basic synopsis courtesy of the Severin Films website:

In 1977, infamous filth auteur Joe D’Amato (BEYOND THE DARKNESS, ANTHROPOPHAGUS) combined the insane extremes of eroticism and cannibalism for the most groin-grinding, gut-munching, gore-spewing EuroSleaze saga of them all: When journalist Emanuelle (the ever-luscious Laura Gemser of BLACK EMANUELLE fame) discovers evidence of an extinct cannibal tribe in a Manhattan mental hospital, her investigation will take her to the Amazon jungle for an orgy of carnage that SexGoreMutants calls “…feral, demented and nasty. And in exploitation terms, that’s entertainment!” Gabriele Tinti (EMANUELLE IN AMERICA), Monica Zanchi (SISTER EMANUELLE) and Donald O’Brien (DOCTOR BUTCHER, M.D.) co-star in “the flesh & fear masterpiece from the late great splatter genius” (DVD Beaver) released to ‘80s grindhouses as TRAP THEM AND KILL THEM and now scanned in 2k from original vault elements.

Once again we are treated to the lovely Laura Gemser as Emanuelle.   This time she is playing a reporter going deep into the Amazon forest to track down one of the last known surviving cannibal tribes.  Needless to say she finds it and all hell breaks loose!   Cannibal films are known for their gore, and this one does not disappoint.   There is tons of blood and lots of intestines being chomped on by the cannibal tribe.  There are some cool booby traps and torture devices as well.  Oh, and speaking of boobies, there are plenty of those on display as well.  That is to be expected, of course, with this being an entry in the Emanuelle series of films.

If you are a fan of the EMANUELLE films and/or cannibal films of the 1970's, you will definitely want to check out EMANUELLE AND THE LAST CANNIBALS.   The film is available now on DVD and BD from Severin Films  Special Features include the following: Posted by ZOMBIE HAYES at 9:36 PM No comments:

Here are this week's horror related DVD/BD's that come out tomorrow, 8/21:

Here are this week's horror related DVD/BD's that come out tomorrow, 8/14:

Posted by ZOMBIE HAYES at 9:46 PM No comments:

Here are this week's horror related DVD/BD's that came out today, 8/7:

Posted by ZOMBIE HAYES at 5:37 PM No comments: