Here are this week's horror related DVD/BD's that come out tomorrow, 1/29: 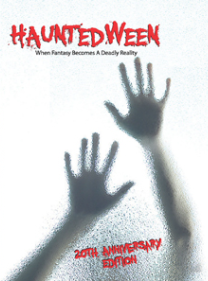 I love finding out about lesser known, independent horror films.  I find a lot more passion and heart goes into these films than a lot of the well known, mainstream horror films that we are constantly fed these days.   This was the case when I came across Doug Robertson's low budget horror film called, HAUNTEDWEEN.    I love checking out low budget horror films, and I am so glad I had to opportunity to watch this one!

Here is the basic plot synopsis courtesy of the film's IMDb page:

Twenty years ago a deadly accident forced Eddie Burber from his home. Since Eddie was younger he wanted to be part of the family business "The Burber Haunted House." A note is placed on the local Fraternity giving permission to use the old house as a fund-raiser. While the students prepare the house, they soon are hunted down and placed in the Haunted House for amusement. One thing is for sure. Nobody knows it really happening - People are dying, and people are laughing.

First thing I have to get out of the way right away is to mention again that this is a very low budget movie.   Know that going into the film and you will have a lot of fun with this one.  Yes, you have to get past some pretty bad acting, but it is still a lot of fun.   I could tell from the beginning that this was a film made by horror fans that knew what other horror fans wanted in a film.   They did not disappoint at all!

The film has a very cool premises of a killer that makes his way inside a haunted house and turns one of the supposedly fake rooms into an actual killing room.   In this room, the maniac kills off the college kids one by one, in some crazy, bloody ways.  All this happens while the customers of the haunted house look on and cheer the killer on, believing what they are watching was set up by the makers of the haunted house.   It's really quite eerie if you think about it, and makes you wonder if this has or ever could happen in real life.

All of the effects are practical, of course, and the filmmakers did an amazing job with the budget they were working with.

If you are a fan of low budget, independent cinema, you will definitely want to give this one a watch.   The DVD is available now and contains the following special features:

You may have noticed the lack of posts lately.....

Back when I started this blog, I prided myself on being one of the only independent horror blogs that made daily posts.  I did that for years, never a day went by that I didn't make a post (check out the archives for tons of old posts).

Well, as my kids have gotten older and more active in school and extra curricular activities, I find that I just don't have as much time these days to post as often as I used to.   But, don't worry.  Like any good zombie, you can't keep me down.  The sight might seem dead at times, but it will always pop back out of the grave every few weeks to show the world I'm still here!  Plus, I don't get nearly as many movies sent to me anymore to review, so I'll mainly post a review when I do get a movie sent to me.   Speaking of that, I recently had a cool independent horror film sent to me that I will review next!

Thanks for all the support to those of you that still check my posts!  I appreciate it and hope you'll follow my on Twitter and Instagram (@frightfan) and like the HAYES HUDSON'S HOUSE OF HORROR Facebook page so you can see when new posts are uploaded!