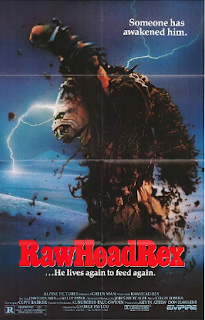 This is something I have been hoping and waiting a long time for .  Clive Barker's film RAWHEAD REX is finally getting re-released!   An old DVD is available, but it is long out of print and very hard to come by.  Some copies have gone for around $100 on eBay recently.   I had always wondered why this film hasn't had a re-release over the years, and I had pretty much given up on it.

Well, the wait is over!  The great folks at Kino Lorber have recently announced that they are in fact releasing RAWHEAD REX!  They will release a 4K restoration of the film theatrically, and then a Blu-ray later in the fall.   No exact release date has been announced yet, but be sure to follow Kino Lorber on Facebook and Twitter to keep up with the details!

Posted by ZOMBIE HAYES at 8:29 PM No comments:

Here are this week's horror related DVD/BD's that come out tomorrow, 4/25:

Posted by ZOMBIE HAYES at 7:22 PM No comments: 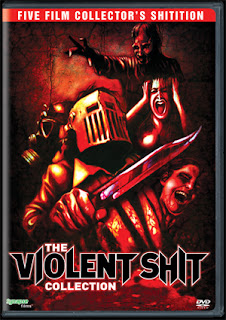 If there has ever been a title that so perfectly described the film, VIOLENT SHIT is the one!    VIOLENT SHIT was made back in 1989 by filmmaker Andreas Schnaas, followed by VIOLENT SHIT 2 in 1992, VIOLENT SHIT 3: INFANTRY OF DOOM in 1999, and then VIOLENT SHIT 4:  KARL THE BUTCHER VS. AXE in 2010.   In this latest release from Synapse Films, all 4 films are collected in this one Special Edition.

Here is the basic plot synopsis of each film courtesy of CAV:

VIOLENT SHITThe legend of "K. the Butcher Shitter" is born in this German DIY video roughie, shot on the low-fi Video-8 format. A demented killer escapes the police & leaves a trail of blood & gore in his wake. Newly re-mastered by the film’s original producer.

VIOLENT SHIT II: MOTHER HOLD MY HAND
Set twenty years after the original film, Karl the Butcher Jr. continues his late father’s legacy. After receiving a machete as a birthday gift from his mother, Karl Jr. turns into a maniacal killer slashing, chopping, shooting & disemboweling his way through the German countryside. Newly re-mastered by the film’s original producer.

VIOLENT SHIT III: INFANTRY OF DOOM (aka ZOMBIE DOOM)
A group of friends get lost at sea & land on a remote island, but they are not alone! Captured by Karl the Butcher Jr. & his father, these men are subjected to a sadistic version of The Most Dangerous Game brought on by the Butcher Shitters and their army of metal-masked killers! Newly re-mastered by the film’s original producer.

VIOLENT SHIT 4.0: KARL THE BUTCHER VS. AXE
The year is 2023, & the world has become a desolate wasteland with gangs taking over the streets. Karl the Butcher Jr. returns from the bowels of Hell, on a mission to kill a new mass murderer named Axe. Original English Language Version.

BONUS FEATURE: ZOMBIE ’90: EXTREME PESTILENCE
Shot for a reported $2000 between the filming of VIOLENT SHIT 1 & 2, ZOMBIE ’90: EXTREME PESTILENCE follows two bumbling doctors as they investigate a zombie outbreak. After a military plane crash releases strange chemicals into the German countryside, the dead rise to attack the living! Can they be stopped? Transferred from an original PAL 1” master given to us by Cinematographer Steve Aquilina.

I had always heard of these films, but had never seen them.  The DVDs used to be hard to come by and quite expensive to get online.  Luckily Synapse has put out this amazing collection so the films are readily available to everyone now!    I have only watched the first 3 movies so far, but I can already tell how amazing this collection is.

The first film is very low budget and looks like it was shot on a VHS camcorder.  It is pretty roughly made, but that does not take away from the enjoyment of it at all.  In fact, it almost makes it feel more real!    The gore is pretty amazing, and of course, all practical effects since it was made back in 1989.  The only negative here is that the blood looks like bright red paint, in fact, it reminded me of the blood from the old Herschell Gordon Lewis films like BLOOD FEAST and COLOR ME BLOOD RED.

The second film is my favorite of the 3 I've watched so far.  It was amazing to see the difference in quality of film from the first film to part 2.  You could tell the budget was a little more  (although still very low) and looks like it was shot with a slightly better camera.   Again the gore here is amazing.  The special effects look great, and the blood looks much more realistic than in the first film.

The third film gets really crazy, as Karl the Butcher is not the only killer, but he has an entire army of mask wielding maniacs joining him this time!   Again, you can see the progression with each film in terms of quality.   This gore effects were once again amazing, including some genital mutilation scenes that made me have to actually turn away from the screen!   That is quite an accomplishment considering I've watched some nasty stuff and not much bothers me!

I am really looking forward to checking out part 4 and the bonus movie.  This is a great collection and the $29.95 price tag is a steal for this 5 movie collection!  I highly recommend this DVD set and would say it is a must have for any gore fan!


The VIOLENT SHIT COLLECTION is available now on DVD from Synapse Films and CAV Distribution.   Special Features include:

Posted by ZOMBIE HAYES at 10:16 AM No comments: 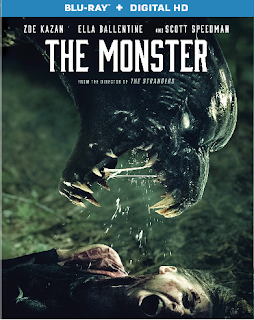 THE MONSTER
Written & Directed by Bryan Bertino
Distributed by Lionsgate

I love a good creature feature, and it seems like that is a sub-genre of horror that we just don't see much of these days.  Nowadays, it's all zombies and Vampires, not that there is anything wrong with that.  I love those types of films, but I just really miss the days of a good creature feature!   Luckily those days are back the the release of THE MONSTER.  A fun creature film that is sure to keep you entertained from start to finish!  Here is the basic plot courtesy of the Lionsgate website:

Acclaimed horror filmmaker Bryan Bertino (THE STRANGERS) directs this suspenseful and scary film, in which a divorced mother (Zoe Kazan) and her headstrong daughter must make an emergency late-night road trip to see the girl’s father. As they drive through deserted country roads on a stormy night, they suddenly have a startling collision that leaves them shaken but not seriously hurt. Their car, however, is dead, and as they try in vain to get help, they come to realize they are not alone on these desolate backroads — a terrifying evil is lurking in the surrounding woods, intent on never letting them leave.

This was a very fun film, it was simple in plot, but kept you entertained the entire running time.  The film was very well done, with good acting and great creature effects...all which looked like practical effects.  That is always a plus in my book.   The film did a good job of keeping you in suspense with some very tense moments as the woman and daughter are trapped inside their car with the creature lurking about.   There were some genuine scares as well, and a good amount of blood/gore.

One thing I didn't like about the film was the lack of explanation about what this monster was.  Was it an alien, a deformed animal, or something completely different?   While some might like the mystery surrounding this creature...I would have liked to see some explanation.  Was this the first time the monster appeared and started killing?  Seems like if this had happened before, people would know to stay away from this area.  Regardless, I am just a curious person so I really want to know what this monster is and where it is from.  Oh well, maybe that's a story for an eventual sequel (or  prequel)!

THE MONSTER is available now from Lionsgate Home Entertainment on both DVD and Blu-ray.  I highly recommend this one if you are a fan of creature features.

Posted by ZOMBIE HAYES at 5:17 PM No comments:

Here are this week's horror related DVD/BD's that came out today, 4/18:

Posted by ZOMBIE HAYES at 5:38 PM No comments:

Check out the Indiegogo campaign for the upcoming Cult Epics hardback book! 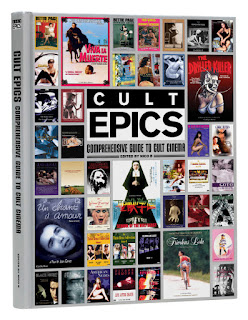 If you are a horror fan, you probably know about the amazing DVD/BD label, CULT EPICS.  They have some amazing releases, including the new releases of the Jorg Buttgereit films NEKROMANTIK, NEKROMANTIK 2, and DER TODESKING.   They also specialize in art-house films and vintage erotica.  They are a great company, and you can check out their website by clicking HERE.  Cult Epics is in the final stages of an Indiegogo campaign raising money to produce a beautiful hardback coffee table book called  CULT EPICS - COMPREHENSIVE GUIDE TO CULT CINEMA.  This looks like it is going to an amazing book filled with great info and interviews about some of the top cult films of our time.  Here is some info taken from the Cult Epics Indiegogo page about the book:

As you can probably tell, this is going to be an amazing book!   There are only 12 days left at the time of this posting, so you need to hurry and get in on this amazing offer asap!  There are only going to be 1000 of these hardcover books made, so these are an extremely limited edition!   The featured perk to get this book is only $50 + shipping, and not only will you get a hardcover copy of this amazing book, you will also get a digital copy of the book, a Cult Epics trailer reel DVD, and your name in the acknowledgments of the book!  Your name could be etched in history!   There are other perks as well, including some awesome signed DVDs and Blu-rays.  Click the link below to check out all the perks and support this great campaign! 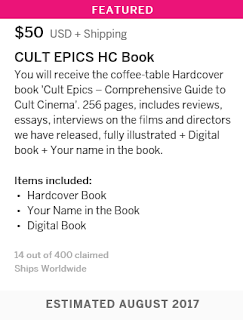 Posted by ZOMBIE HAYES at 7:38 AM No comments:

Here are this week's horror related DVD/BD's that come out tomorrow, 4/11:

Posted by ZOMBIE HAYES at 8:51 PM No comments:


While cruising around on Facebook, I came across a post from Heavy Metal Magazine about a short film called, FANTASY.    I clicked on it and was blown away by this awesome animated short film.

Check it out and let me know what you think!


DyE // Fantasy from Vova Sadwave on Vimeo.
Posted by ZOMBIE HAYES at 8:32 PM No comments: