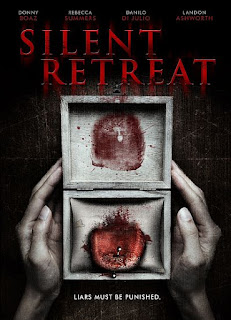 I had never heard of this film when it arrived in my mailbox for review.  I honestly didn't expect much going into it, and I am happy to say that this film was a very pleasant surprise for me.  I really didn't expect it to be as good as it was.  Here is the basic plot from the Midnight Releasing website:

Six members of a media company go on a weekend business retreat at an isolated lodge in the woods. When one of the members goes missing, they discover that the lodge was formerly a private mental institution. One by one, they fall victim to the dark secrets buried at the lodge.

I'll be honest, I think why I wasn't expecting much out of this film was from that plot synopsis. I felt like this was going to be just another generic people get killed one by one type of film that we have all seen many times before.   It turns out, this film is so much smarter than that.  The film is full of dark humor and some great kills, including a horrifying bear trap incident!    The film also contains a very engaging story line and includes a great plot twist that had me second guessing the entire film I had seen up to that point.

Another thing worth noting here is the acting, which I thought was very good from everyone involved.   This is a great, fun film that I would recommend for sure!

SILENT RETREAT is out now on DVD and contains the following special features: