THE HAUNTED WORLD OF EL SUPERBEASTO 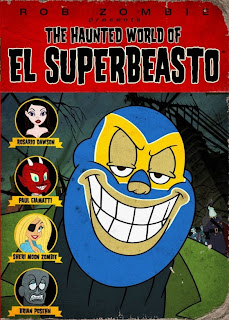 I am super excited about this new animated film from Rob Zombie. I am a HUGE fan of his films, so anything with his name on it, I am all about. For those of you that don't know about this film, it is based on the character of El Superbeasto, a masked wrestler/crime fighting super agent. El Superbeasto was a character in Rob Zombie's original comic books called ROB ZOMBIE'S SPOOKSHOW INTERNATIONAL. Here is the synopsis from the official website:

Rob Zombie presents a hilarious animated adventure of a crime fighting secret-agent, El Superbeasto. A massive, over-the-hill masked wrestler, El Superbeasto has more interest in exotic dancers than adventure. Despite his disinterest, however, he still manages to get involved with murderous, super-intelligent gorillas, Liverpudlian zombies, and Dr. Satan - a manic-depressive mad scientist obsessed with finding the perfect woman. Throughout his unusual escapades, he is joined by his sister, Suzi X, a sexy super-spy adventurer, and her sidekick: a 10-foot tall robot named Marvin, who digs Barry Manilow and Michael Bolton. Rosario Dawson and Paul Giammati are among the stars that lend their voices to this uniquely animated, colorful, and bizarre comedy Zombie dubs "Austin Powers meets The Munsters by way of Hard Days Night."
Wow...I don't know about you, but it sounds awesome to me! Check out the trailer and let me know what you think!!!
Click HERE to watch the RED BAND Trailer
Click HERE to go to the official EL SUPERBEASTO website
Posted by ZOMBIE HAYES at 5:07 PM