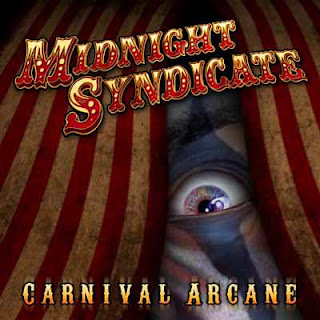 Some of you might recognize the band Midnight Syndicate from the 4H review of their film, THE DEAD MATTER a while back  (see review here).  Well, Midnight Syndicate is back with a brand new CD entitled, CARNIVAL ARCANE. For those of you not familiar with Midnight Syndicate, here is a little bit about them from their official website:

For the past fourteen years, dark music pioneers Midnight Syndicate have been creating Halloween music and gothic, horror, fantasy soundtracks for the imagination. Formed by composer/director Edward Douglas in 1995, their music has become a staple of the Halloween, gothic music, haunted attraction, and role-playing game industries. With a catalog of CDs that blend dark, orchestral horror and fantasy movie score-style music with sound effects, the band consisting of Edward Douglas and Gavin Goszka has had its soundtracks to imaginary films featured in everything from Hugh Hefner's infamous Halloween parties, Barbara Walters specials and Monday Night Football to X-Box games, tracks by the Academy-Award winning rap act, Three Six Mafia, as well as concerts by dark music pioneers The Misfitsand King Diamond. The music has also been featured on countless television shows and documentaries relating to horror films and the supernatural.

I like that in the description it says they create "fantasy soundtracks".  That is a perfect description of this CD.   Listening to CARNIVAL ARCANE is like listening to the soundtrack of a cool horror film.   As I listened to the CD on my way to and from work today, I couldn't help but imagine in my head a scene that would fit the sound of the song that was playing.

The CD is mainly just instrumental music, basically like a score to a horror film.  A lot of the songs I can picture being the opening song of a film as the credits are displayed, or the end song as the credits scroll.   The song Welcome To The Carnival would be a perfect opening song for a film.  One of my favorite songs, the perfectly titled Dr. Atmore's Elixirs of Good Humor and Fortification, is a catchy fun tune with a beautiful background melody. Lights Out made me picture a woman being chased through the woods by a masked killer, and Kiddieland is just totally creepy!  Never have kids laughing and singing sounded so scary!   This is just a few of the great tracks on this CD, there are 26 tracks total, so you are definitely getting your money's worth with this one!

While some are just cool, spooky sounding songs, some are very beautiful songs that could easily be used as  title music for a big budget, blockbuster film.  Yet even in the songs with a nice classical sound,  the band still manages to sneak some creepy things into it...whether it be a creepy whisper or voice, or just a creepy chord or sound.

I highly recommend you go check out Midnight Syndicate's homepage and pick up a copy of CARNIVAL ARCANE and some of their other CDs.  I think all horror fans will enjoy this music for sure!