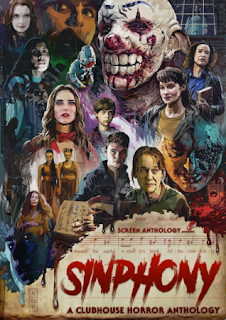 Welcome back to Hayes Hudson's House of Horror!    My blog has been dormant for a while, but like any good zombie, it's bound to come back to life eventually!

My first review for my newly resurrected site is a fun anthology film called SINPHONY.

Here is some info on the film from the official press release:

Conceived and curated entirely on the popular, audio-based social media platform Clubhouse and produced by Screen Anthology, SINPHONY: A Clubhouse Horror Anthology features a group of international filmmakers each exploring a character dealing with tragedy caused by a supernatural entity.

SINPHONY’s shocking stories include: an innkeeper’s growing concern about his secretive new guests; a contractor who inhales mold spores that lead to murder; a couple confronting the fact that one of them is a ghost; a witch protecting her child from a killer; a dance craze that has dire consequences, and much more

A small-town innkeeper's growing concern over domestic abuse between his new guests takes a horrific turn as he stumbles upon their monstrous secret.

After a botched robbery, a young woman bleeds out in her car, while being terrorized by a ghostly figure.

A recently separated couple comes to terms with the fact that one of them is a ghost.

A witch must summon the power of her coven to defend her child from a crazed killer.

Intent on capturing an original moment in time, a woman faces a deadly battle when the moment fights back.

In a desperate attempt to preserve her youth, a 30 year old woman engages in a social media dance craze that may have dire consequences.

The anxiety of a woman unplanned pregnancy intensifies as her body goes through a series of unexplained changes.

A parasitic brain infection causes by a cursed song when heard, sends ordinary people into a killing frenzy.

I am a huge fan of anthology films.  For one, I have a very short attention span so focusing on one story for 1 and 1/2  to 2 hours can be hard for me, unless the story/film is just wildly entertaining.   With anthology films, if one story is not doing  it for you, just wait a few minutes and you're on to a completely different story!   This film was well paced and packed 9 different stories into the tight 88 min run time.  This kept the entries short and to the point, which I definitely appreciated!

While some stories were better than others, I found them all to be entertaining.  My personal favorites were MOTHER LOVE and EAR WORM.   One thing I found very interesting about this film was the use of a single song, used in all the entries, and each song made in a different genre of music to fit the narrative of that particular story.   This was a cool and unique concept.

If you are a fan of anthology films, I highly recommend checking out SINPHONY!