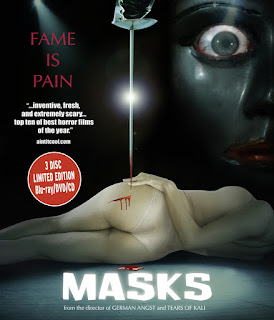 I'm going to go out on a limb here and say that Andreas Marschall's MASKS is one of the best horror movies you have never heard of.   I know I had never heard of it, so I assumed it was a brand new film.  Turns out, it was made back in 2011 but just now getting U.S. distribution thanks to the awesome new extreme genre label, ReelGore Releasing.   Here is the basic plot of the film from the ReelGore website:

Stella longs to be an actress. When she is accepted to a private school in Berlin, her dream seems to come true. But there is something wrong with the “Matteusz Gdula-Institute”. In the seventies, the school´s founder, Matteusz Gdula, practiced a learning style that promised to let students shine by driving them to their mental limits. In the end his method was banned, as mysterious deaths occurred during his lessons and Gdula committed suicide.At night, Stella hears eerie sounds in the corridors of the school. A fellow student disappears. Stella suspects that behind the closed door to the abandoned, forbidden wing of the school lurks a bloody secret.
A secret that kills the students...

I had no clue what to expect going into this film, but what I got was a an amazing horror film.  Part slasher, part psychological thriller, part giallo, and part arthouse film all rolled up into one very entertaining movie.

A few things really stood out for me, the first one being the music used in this film.  The film has a very haunting theme that plays at many times throughout the film.   The theme is amazing and is a perfect, creepy fit for this film.  It's not often that I really pay attention to the music in horror films, but this one demands your attention for sure.

Another thing that stood out was the kills/gore.   I have seen tons of horror films and not many make me jump or cringe anymore, but this film made me do both, and at one particular kill, made me do both at the same time.  I actually let out a yell during the first kill that seemed to come out of nowhere and really caught me off guard!

I also picked up on some nods or inspiration from other famous films/directors, most notably Dario Argento and the film SUSPIRIA.   The acting school here reminded me a lot of the ballet school from SUSPIRIA, both are run by some creepy women and both hold secrets beyond the walls of the schools.   Also, Argento's use of color and color schemes was on display here in full force...and done quite well.

This movie was extremely suspenseful, and I am putting this among my top films I have seen this year.   Give it a watch and let me know what you think.     The Blu-ray/DVD/CD combo pack is available now from ReelGore Releasing and contains the following special features: 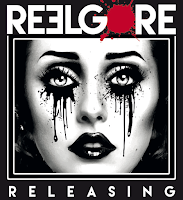