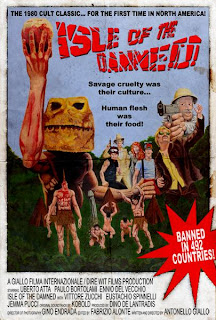 Before I get to the review of ISLE OF THE DAMNED, please CLICK HERE and buy this film now. You will not be disappointed. I can't remember the last time I had this much fun watching a Horror film! Ok, now on to the review. ISLE OF THE DAMNED is from Dire Wit Films and was written by Mark Leake and directed by Mark Colegrove. Here is the plot synopsis from the Dire Wit Films website:

In Antonello Giallo's follow up to the notorious Pleasures of the Damned, private investigator Jack Steele is hired by a mysterious treasure hunter to help find the lost treasure of Marco Polo. Along for the trip is Jack's adopted son, Billy. Their search brings them to an island off the coast of Argentina... and into the clutches of a primitive cannibal tribe, the Yamma Yamma. Alexis Kinkaid, a mysterious recluse who has made his home on the island amongst the cannibals, may hold the key to unlocking the island's secret... if they don't end up in the belly of a savage first! Isle of the Damned, shot on location in Argentina in 1980, brought Giallo under fire yet again... this time by the Argentinean government, who issued a warrant for Giallo's arrest under suspicions of abuse of the native peoples. Giallo fled the country before he could go to trial. The film has been long out of print, but is presented here in a digitally remastered form.
ISLE OF THE DAMNED is a perfect parody of the Italian Cannibal films of the 70's and 80's. The film is even made to look like an old, lost films, from the intentional bad voice dubbing, right down to the grainy footage and film imperfections. I just can't say enough about this film. The film had me laughing out loud at some parts, and had me turning away in disgust in other parts! A great combination that every Horror/comedy film should have, but most don't. Most Horror/Comedies are either funny with not much Horror, or more of just Horror with not much funny stuff...this is a perfect combination.
For those that just want Horror, then you will not be disappointed by any means. The film is full of over the top gore, including scenes of a mans ribcage getting pulled from his chest, and then his skin completely pulled off of his face, leaving a disgusting looking blood and muscle covered skull. There is also the famous genital mutilation scene that will make any guy that watches this film squirm!!
I really have nothing negative to say about this film. The acting in the film is great. It is actually really bad, but it is supposed to be bad, so by that reasoning it is actually very good! Make sense! The make up and gore effects are superb as well.
Do yourself a favor and buy a copy of ISLE OF THE DAMNED right now!!

CLICK HERE to visit the official website of Dire Wit Films and to watch the trailer for ISLE OF THE DAMNED
CLICK HERE if you haven't already to buy this film NOW!!
Posted by ZOMBIE HAYES at 9:37 PM