Blu-ray review: THE LORDS OF SALEM 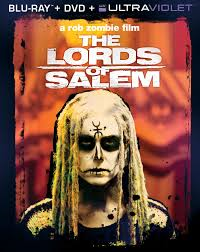 I know I am a little late on this review, but better late than never I guess.  THE LORDS OF SALEM is Rob Zombie's latest film which opened back in April of this year in limited theaters.  I didn't think I was going to be able to see this film in the theater, because it was not playing in any theaters around me at the time of it's release.  But a few weeks later, the next city over started playing it so I was able to go see it.   This film had been really hyped up, and being a huge fan of Rob Zombie's previous films, I was super excited to see this film.  Here is the basic plot of the film from the Anchor Bay website:

It has been called “disturbing” (Los Angeles Times), “nerve-shattering” (Chicago Reader) and “Rob Zombie’s masterpiece” (Loudwire.com). From the nightmare mind of writer/director Rob Zombie comes the terrifying story of Salem, Massachusetts radio DJ Heidi LaRoc (Sheri Moon Zombie of THE DEVIL’S REJECTS) who receives a mysterious record labeled “a gift from The Lords”. But when Heidi plays the disc, its bizarre sounds will trigger visions of the town’s depraved past, release the darkness within her own damaged soul, and unleash the long-awaited vengeance of Satan himself. Bruce Davison (WILLARD) and a coven of genre legends co-star in this stunning witchcraft shocker that Beyond Hollywood calls “a full-on piece of satanic madness…

I have to admit, when seeing the film in the theater, I was not blown away like I expected to be.  I didn't hate the film either, it seems as though I was just sort of on the fence about this one.  From reading other reviews it seems like you either loved it or hated it.  I was just indifferent to it upon first viewing.  I remember leaving the theater confused, and perplexed, wondering exactly what I had just seen.
The film had it's pros and cons, and upon second viewing with the Anchor Bay Blu-ray release, I was able to find more pros than cons the second time around.   The movie was more enjoyable to me the second time around, maybe because I knew what to expect and I wasn't expecting a masterpiece like I was upon my first viewing.  I have to say that the acting in this film was excellent, especially from the seasoned veterans such as Bruce Davison, Dee Wallace, Meg Foster, and Patricia Quinn.  The film was also extremely good visually.  There are some very creepy visuals and a very good used of color in this film, reminiscent of the way color was used in Dario Argento's Three Mothers trilogy.

If you saw this film in the theater and felt a bit let down, I encourage you to give it a second viewing on home video.  THE LORDS OF SALEM is available now on DVD and Blu-ray from Anchor Bay Entertainment.